The disgraced movie mogul, 66, was filmed and photographed arriving at the police station flanked by uniformed police officers and with a limp. He was also carrying three books, two of which TIME has identified.

One of the books was Something Wonderful: Rodgers and Hammerstein’s Broadway Revolution by Todd S. Purdum, which was released in April.

The other appeared to be Richard Schickel’s biography of the controversial director and producer Elia Kazan, known for pioneering stage productions of A Streetcar Named Desire and Death of a Salesman, as well as the movies On the Waterfront and East of Eden. Kazan, whose films earned a total of 21 Academy Awards, testified in front of the House Un-American Activities Committee in 1952, where he named eight colleagues who, like himself, had been communists in the 1930s. Kazan is among the most well-known examples of a top Hollywood figure whose behavior toward others in the industry turned him into a persona non grata.

The third book appeared to be leather-bound, and was possibly a journal or notebook.

In a statement, the New York Police Department thanked the “brave survivors for their courage to come forward and seek justice,” and said Weinstein’s arrest was the result of a joint investigation between the NYPD and the Manhattan District Attorney’s Office.

Weinstein left the police station in handcuffs at roughly 8.50 a.m. ET and was escorted into a car. 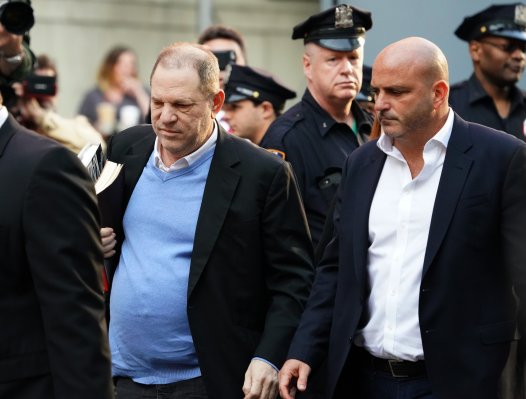