They’re here: the first official royal wedding photographs from the memorable 2018 royal wedding, starring bride and groom Meghan Markle and Prince Harry — and surrounded by the rest of the royal family, including the Queen and the bridal party.

The portraits, taken by photographer Alexi Lubomirski, show the Duchess of Sussex and her groom in all their wedding finery alongside Harry’s best man Prince William and Catherine, Duchess of Cambridge, his father Prince Charles and Camilla, Duchess of Cornwall, and his grandmother the Queen with Prince Philip. They’re joined by Markle’s mom Doria Ragland and her bridal party, made up of bridesmaids and page boys including Prince George and Princess Charlotte. Two of the photos are snapped inside Windsor Castle in the Green Drawing Room, according to the Kensington Royal Instagram account, and were taken just after the carriage procession. Aptly, both the Queen and Ragland wore green outfits, making the color scheme quite consistent. One image features the whole group, while another has just the bride and groom with all of the children arranged around them. There are quite a lot of personalities captured in that one picture; all the kids are under seven years old, after all.

A third image, in black and white, shows only Meghan and Harry reclining on the castle steps, looking filled with joy.

“The Duke and Duchess of Sussex would like to thank everyone who took part in the celebrations of their wedding on Saturday,” the caption notes, mentioning their newly-bestowed official titles. “They feel so lucky to have been able to share their day with all those gathered in Windsor and also all those who watched the wedding on television across the UK, Commonwealth, and around the world.”

Hopefully these will be just the first of many snaps we get from the family’s big day. 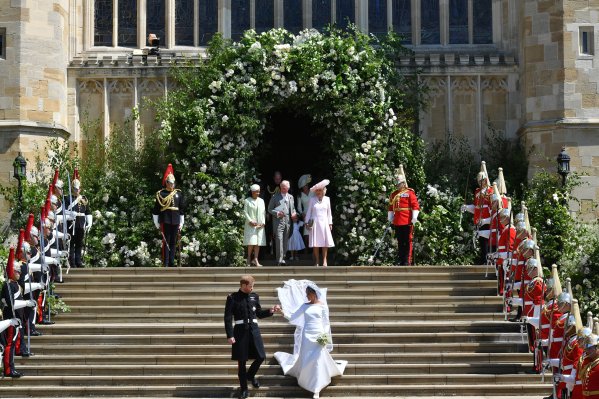 Meghan and Prince Harry Did Something Special With Those Royal Wedding Flowers
Next Up: Editor's Pick