The hospital announced that it got a “very special delivery” of some world famous blooms on Sunday.

“A big thank you to Harry and Meghan and florist Philippa Craddock,” St. Joseph’s wrote in a thank you Facebook post. “Our hospice smells and looks gorgeous. Such a lovely gesture.”

According to the BBC, one patient had a special connection to the main event. Pauline Clayton, 89, said she worked for Norman Hartnell as a teenager to help embroider Queen Elizabeth II’s Botticelli-esque wedding gown.

But before patients even got the hand-tied bouquets, the royal wedding flowers carried another poignant message. Floral installment designer Philippa Craddock used white garden roses, loved by the late Princess Diana, to fill the archway above the threshold where Meghan took her first steps into St. George Chapel. There were also peonies, birch and beech branches in the mix throughout the chapel.

For Meghan’s bespoke bridal bouquet, Prince Harry picked a number of flowers from the couple’s private garden at their home in Kensington Palace. It included another go-to flower for Princess Diana: forget-me-nots. Following royal tradition, she left this bouquet on the grave of the unknown warrior at Westminster Abbey. 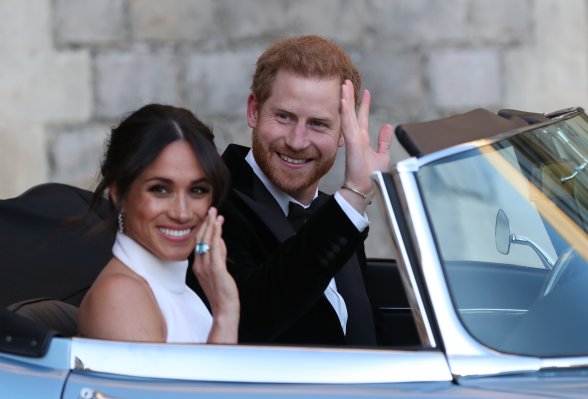 The One Romantic Detail from Meghan and Harry's Swaggy Reception Sendoff You Probably Missed
Next Up: Editor's Pick