Less than a month ago, about 10 students at Santa Fe High School in Texas participated in the national walkout against school shootings. They handed out fact sheets about gun violence, read a poem by a Parkland shooting survivor and held a sign with a message of solidarity: “Santa Fe High School says #NeverAgain.”

On Friday morning, 10 people at Santa Fe High School were killed when a gunman, reportedly a student, opened fire there.

“We read a poem by a parkland survivor, handed out gun violence fact sheets and orange ribbon, did 17 minutes of silence, and then talked about ways to raise awareness for gun violence, and make your voice heard,” a Santa Fe student wrote in a tweet on April 20, sharing photos from their walkout on the anniversary of the mass shooting at Columbine High School.

Now, Parkland shooting survivors are sharing messages of support with the students of Sante Fe. “This is the most fatal shooting since the one at our school and tragedies like this will continue to happen unless action is taken,” the organizers of March for Our Lives said in a statement on Friday. “Santa Fe, we are with you, and we will do whatever we can to support you as the days go on.”

Authorities said 10 people were killed and 10 others were wounded in Friday’s shooting. A suspect — identified as 17-year-old Dimitrios Pagourtzis — has been taken into custody.

The Santa Fe High School shooting follows months of protests and marches against gun violence, and it has become the latest incident to exemplify the frequency of mass shootings in the U.S.

One Santa Fe High School student interviewed by a local news station on Friday said she was not surprised that a shooting had occurred at her school.

“It’s been happening everywhere. I’ve always kind of felt like eventually it was going to happen here, too,” she said. “I don’t know. I wasn’t surprised. I was just scared.” 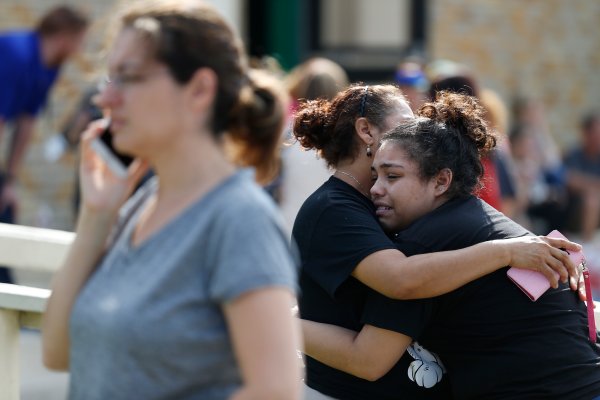