Cambodia Has Made Its First Arrest Under a Repressive New Law

Cambodian police block a street during a rally of lawmakers and supporters of the Cambodia National Rescue Party (CNRP) in Phnom Penh on Sept. 26, 2017.
Tang Chhin Sothy—AFP/Getty Images
By Eli Meixler

Cambodia has made its first arrest under a contentious lèse-majesté law that outlaws insulting the country’s monarchy, broadening the already extensive arsenal of repression at the disposal of the state.

Police in Kampong Thom province arrested Kheang Navy, a 50-year-old teacher, over a Facebook post that allegedly accused Cambodia’s king and other members of the royal family of colluding with the government to ban the the Cambodian National Rescue Party (CNRP), the main opposition political party, Reuters reports. Under the law, which came into force in February, he faces between one and five years in prison and a fine of up $2,500 — an enormous sum for most Cambodians.

The law, which has been roundly condemned by the United Nations and dozens of rights groups, empowers prosecutors to file charges against anyone suspected of insulting the monarchy, including institutions and media outlets.

In Thailand, over 100 lèse-majesté cases have been filed since a military junta, led by Gen. Prayuth Chan-ocha, took power in a 2014 coup, according to legal rights consortium FIDH. Those convicted under the law face up to 15 years in prison. 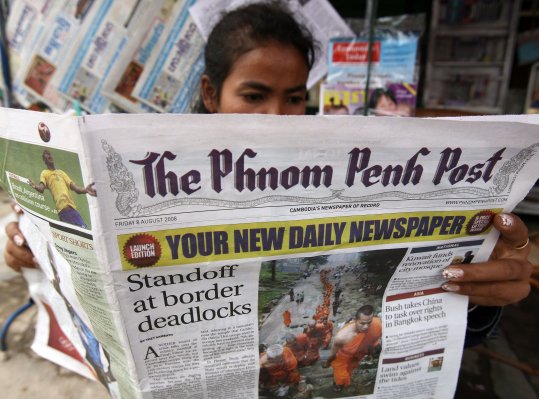 Sale of Cambodian Newspaper Puts Press Freedom in Peril
Next Up: Editor's Pick