When Prince William and Kate Middleton tied the knot in 2011, their kiss on the balcony of Buckingham Palace was celebrated around the world. But for one young bridesmaid, the romance of the moment was clearly lost in the roar of the crowd.

In a photo that quickly went viral, the then 3-year-old Grace van Cutsem can be seen covering her ears and pouting as the bride and groom share their first public smooch in front of the thousands of supporters gathered on The Mall—as well as the millions watching from home.

Catherine, Duchess of Cambridge, and Prince William, Duke of Cambridge, kiss on the balcony of Buckingham Palace following their wedding at Westminster Abbey on April 29, 2011 in London, England.
Mark Cuthbert/UK Press via Getty Images

Unfortunately, much to the Internet’s disappointment, Grace was nowhere to be seen at Prince Harry and Meghan Markle’s Saturday nuptials.

Although her younger cousin, 3-year-old Florence van Cutsem, acted as a bridesmaid in the ceremony, Grace never made an on-camera appearance.

“I would like the now ten-year-old Grace van Cutsem to be on the balcony to recreate this moment at the #RoyalWedding2018,” one Twitter user tweeted alongside the famous photo.

See some more reactions to Grace’s absence below. 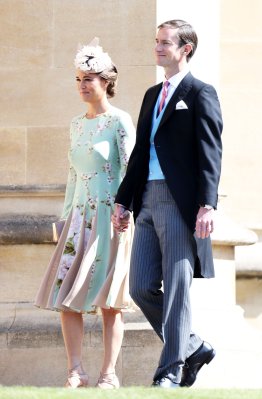