Ideas
By Kelsey Davenport
Davenport is the Director for Nonproliferation Policy at the independent, nonpartisan Arms Control Association.

By blocking Iran’s pathways to nuclear weapons, the 2015 agreement with Iran had helped resolve a long-standing crisis that was destabilizing the Middle East. But on Tuesday, President Donald Trump put this critical accord at risk with his reckless and irresponsible decision to violate the multilateral nuclear deal. By walking away from the agreement, Trump is jeopardizing U.S. national security interests and risks precipitating a nuclear crisis that the international community can ill afford.

Trump’s justification for abandoning the deal rests on a series of flawed assertions and a disregard for the value of agreement, known as the Joint Comprehensive Plan of Action (JCPOA). The deal is not built on “lies,” nor will it “expire” in seven years as Trump claims. Rather it puts in place a wide array of restrictions and prohibitions on the most sensitive nuclear activities and it requires permanent, robust international monitoring to detect and deter any future effort by Iran to reconstitute the nuclear weapons effort it had pursued before 2004.

From a nonproliferation perspective, the 2015 Iran deal has been a resounding success. Before the JCPOA, Iran could have produced enough bomb-grade uranium for a nuclear weapon in two to three months. If Tehran decided to dash to a bomb, the international community would have struggled to stop it.

By requiring a two-thirds reduction of its uranium enrichment capacity and a massive drawdown of its enriched uranium stockpile, the nuclear deal stretches that time line to more than 12 months for the first decade of the agreement. The 2015 accord also subjects Iran to the most intrusive monitoring and verification regime ever negotiated. No site, not even military installations, are off limits to the International Atomic Energy Agency if it finds evidence of illicit nuclear activities.

In return, Iran received relief from sanctions and a commitment that the United States and its negotiating partners would refrain from reimposing nuclear-related sanctions—a commitment Trump violated when he declared that U.S. sanctions will come back into effect.

Without question, Iran is meeting its commitments under the deal. International inspectors have reported 10 times that Iran is adhering to the limits set by the deal. On Wednesday, one day after Trump announced his withdrawal from the deal and accused Iran of lying, the head of the International Atomic Energy Agency noted again that Tehran is meeting the terms of the agreement. Even critics of the deal, such as Secretary of State Mike Pompeo, have admitted that there is no evidence that Iran is in violation of the agreement. In short, there is no legitimate basis for Trump to reimpose sanctions.

Trump’s other criticism—that the deal paves the way to an Iranian nuclear weapon in seven years—is based on a flawed analysis. He discounts the value of permanent monitoring mechanisms and prohibitions put in place by the deal—which act as a bulwark against nuclear weapons development. While some restrictions on Iran’s uranium enrichment capacity do ease after the first decade of the agreement, other key restriction and monitoring and verification mechanisms will remain in place.

What makes Trump’s decision so dangerous is that there is no “Plan B” for addressing a resurgent Iranian nuclear program. His plan to pursue a “better deal” is a myth—by violating the current agreement, Trump isolated the United States and dealt a serious blow to U.S. credibility. America’s partners in the deal, particularly Washington’s European allies, have already rejected Trump’s plan to use sanctions to coerce Iran into accepting new terms and pledged to sustain the current agreement.

These states, particularly, the EU, also have powerful tools at their disposal to block U.S. sanctions from targeting legitimate business with Iran and sustain the current deal. It is critical that they act quickly to demonstrate to Tehran that there will be an economic benefit to remaining in compliance with the deal.

Iranian President Hassan Rouhani said that for now Iran will continue to adhere to the terms of the deal, despite Washington’s reimposition of sanctions. While Rouhani may be able to stave off a short term crisis, if the EU, Russia, and China cannot deliver economic incentives, Iran may reevaluate that decision. As Iran’s Foreign Minister Mohammed Javad Zarif said April 22, if the “benefits of the deal for Iran start to diminish, then there is no reason for Iran to remain in the deal.” And following Trump’s announcement on May 8, Iran’s Supreme Leader Ali Khamenei took a harder line, saying that he does not trust European partners in the deal and if they do not offer definite guarantees, Iran will not stay in the nuclear agreement.

If Tehran takes steps to resume nuclear activities, it could quickly get back to where it was in 2013—capable of producing enough fissile material for a nuclear weapon in 2-3 months. This time, however, the United States will not have the international community behind it, supporting sanctions and a negotiated agreement.

The fallout from Trump’s decision is not just confined to Iran. There are serious nonproliferation consequences beyond Iran’s borders. If the deal collapses and Tehran resumes troublesome nuclear activities, it could precipitate a regional crisis. Prospects for a regional arms race were significantly diminished when Iran’s nuclear program was limited and under a microscope, but any loss of restrictions and inspectors may spur states like Saudi Arabia to match Iran’s capabilities to produce nuclear material.

Trump is also about to sit down for a historic summit with North Korean leader Kim Jong Un to discuss denuclearization of the Korean peninsula. After last year’s heightened tensions between Trump and Kim, the summit is a real and welcome opportunity to reduce the threat posed by North Korea —a country which, unlike Iran, actually possesses nuclear weapons and missiles capable of targeting the United States.

But Trump’s violation of the Iran deal makes progress on an accord with North Korea more difficult. Trump just sent a message to Kim that that even if an agreement is reached and North Korea abides by its terms, there’s no guarantee that Washington will fulfil its commitments. This will likely increase North Korea’s bargaining leverage and make it harder for Trump to seize this critical opportunity to put North Korea on the path to denuclearization.

Trump’s decision to violate the nuclear deal with Iran undermines broader efforts to prevent the spread of nuclear weapons. The United States does not need, and cannot afford another nuclear crisis. Washington, however, has few cards to play to stave off the crisis that Trump’s actions may incite. If the world wants to prevent Trump’s decision from causing a catastrophe, the international community will need to step up. 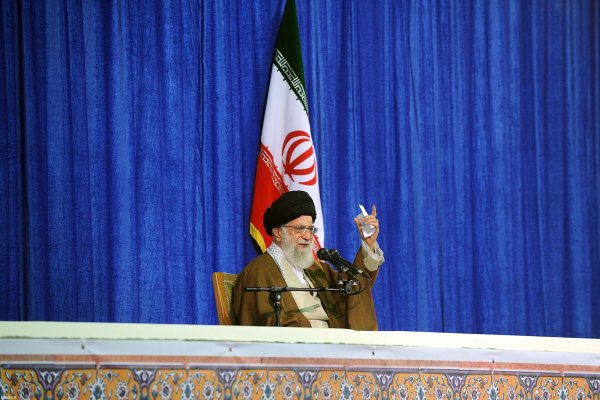 How Iran Is Reacting to Trump's Decision to Quit Nuclear Deal
Next Up: Editor's Pick