Here's Your First Look at the Meghan Markle Wax Figure

Of course you can get a selfie right next to soon-to-be royal Meghan Markle.

London’s Madame Tussauds wax museum gave us our first look at their Meghan Markle wax figure on Wednesday, and perhaps surprisingly, they nailed it.

You might recognize the dress. The contemplative-looking wax figure of Markle is sporting the same forest green sleeveless P.A.R.O.S.H. shift dress she wore for her engagement snapshots with Prince Harry. And on her hand, you’ll see a replica of Markle’s sparkly diamond engagement ring that Prince Harry designed.

The wax version of the former Suits star stands in front of another accessory — her fiancée, noted popcorn theft victim, Prince Harry. But the Prince Harry wax figure’s toothy smile is old news now. The museum created him in 2014 to mark his 30th birthday.

The Markle wax figure exhibit actually launches on May 18, the eve of the big royal wedding. Expect a bachelor and bachelorette party theme. Tickets start at $39 for adults, and visitors named “Meghan” or “Harry” get in free.

“There is a lot of love out there for Meghan and Harry and we’re following their lead by inviting the great British public to join the couple in their wedding celebrations here at Madame Tussauds London,” the museum’s general manager Edward Fuller said in a statement.

Meghan Markle the human will marry Prince Harry on May 19 at St. George’s Chapel.

See photos of the figure below. 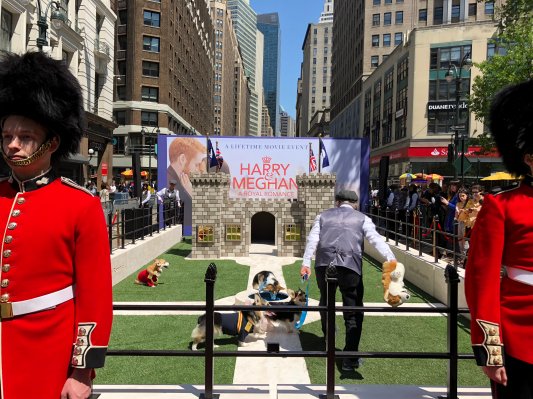 Corgis Dressed Up As a Prince Harry and Meghan Markle for a Royal Wedding of Their Own
Next Up: Editor's Pick