The Best Views of Jupiter Are Happening Tonight. Here's How to See It

Earth dwellers, turn your attention to the sky Tuesday night. Jupiter will shine its brightest all year, making the giant planet visible to the naked eye. (That is, if clouds don’t get in the way.)

Jupiter will shine brightly Tuesday night since the planet is in opposition to the sun, according to EarthSky.org, a radio program dedicated to science and nature. “Opposition,” in astrological terms, means Earth will sit directly between Jupiter and the Sun, making the planet more visible than usual. Indeed, the planet will shine brighter than the all of the stars in the sky — but, of course, the sun, the moon and Venus, the brightest planet from Earth’s perspective, will shine brighter.

Jupiter’s opposition is projected to occur at around 9 p.m. ET on Tuesday night, according to EarthSky. Viewers can expect to see it in front of the Libra constellation.

In late April, star gazers got a glimpse of a full moon next to Jupiter. The giant planet will come its closest to Earth in orbit on May 10.

The planet’s opposition happens every 13 months, according to EarthSky, and will occur again on June 10, 2019. 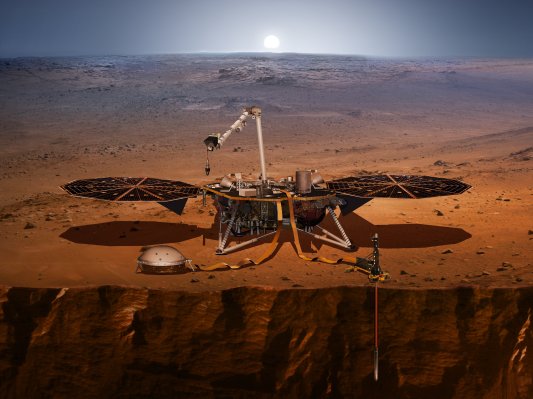 NASA's InSight Lander Is About to Give Mars its First Health Checkup in 4.5 Billion Years
Next Up: Editor's Pick