Royal guards stand by as the corgis play in their enclosure.
Raisa Bruner
By Raisa Bruner

The sun was shining on the royal wedding party — that is, a royal wedding party of corgis — on Tuesday in New York City, where Lifetime hosted a gathering of canines of unimpeachable pedigree. The corgis gallivanted in front of onlookers and enacted a wedding of their own, á la the upcoming nuptials of Prince Harry and Meghan Markle on May 19.

The “Royal Corgi Court,” as it was dubbed, was convened in honor of the new Lifetime movie Harry and Meghan: A Royal Romance, which airs May 13 at 8:00 p.m. Eastern. But the real draw for the amused crowd that descended on Herald Square Plaza was the corgis. There was a red carpet to strut down and a faux-grass courtyard (with fountain) and mini-Windsor-on-the-Hudson Castle playhouse for the dogs to to romp around, all set to the tunes of the Beatles and the Spice Girls. Two (human) guards in full regalia even maintained order on the scene, faces impassive despite the corgis at play just behind them.

A trainer plays with the corgis in front of a palace playhouse.
Raisa Bruner

Corgis are, of course, a favorite of the Windsor royal family; the Queen has bred many of them for nearly eight decades, although her last true corgi, Willow, recently passed away.

The event made sure to entertain with plenty of pomp and circumstance befitting the royal pedigree: first each pup was paraded down the red carpet as a herald decried his or her title, treating the crowd to the presence of “Prince William,” “”Duchess Catherine,” “Prince George,” “Princess Charlotte,” “Prince Harry,” “Meghan Markle” and “Queen Elizabeth” herself, each decked out in a doggy costume to denote their character. (Markle had a bit of difficulty with her rhinestone tiara, which kept slipping.)

Once inside the castle enclosure, the corgis were let loose with a trainer to prance about. “Prince Harry” spent much of his time lapping water from the fountain, while “Markle” seemed more interested in sitting pretty near the entrance to the castle. After about half an hour, the royal court was rounded up and given a rest, to return periodically throughout the day.

A thirsty Prince Harry laps at water from the fountain.
Raisa Bruner
One of the princes and Princess Charlotte make a bid for freedom.
Raisa Bruner
Corgis at play.
Raisa Bruner
More Must-Read Stories From TIME 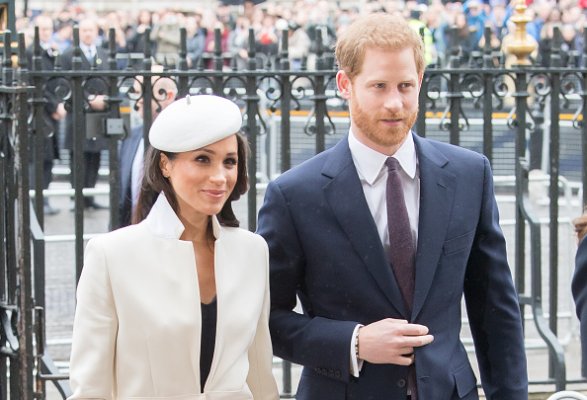