Stormy Daniels Stars As Herself in Star-Studded SNL Cold Open

After a chaotic series of calls, Stiller got Daniels on the phone with Baldwin. Baldwin, as Trump, told Daniels: “Stop making such a big deal about this. Everyone knows it’s just an act.” Then he asked: “What do you need for this to all go away?”

“A resignation,” she responded.

“I know you don’t believe in climate change, but a storm’s a-comin’, baby,” she added.

Daniels’ appearance on Saturday Night Live comes after a similarly chaotic week in the White House after Giuliani, a former New York City mayor and newest member of the president’s legal team, told Fox News’ Sean Hannity that Trump repaid Cohen for the $130,000 hush payment to Daniels — a transaction Trump has denied. Saturday Night Live used the complicated situation as the basis for its cold open, as Stiller, playing Cohen, called the president and a number of characters in Trump’s orbit.

Speaking with McKinnon’s Giuliani and Baldwin’s Trump, Stiller pleaded: “Guys, can we please just decide on one line and stick to it? ‘Cause our stories are all over the place.”

The sketch then launched into a series of appearances of Trump associates played by comedians. Martin Short appeared as Dr. Harold Bornstein, Trump’s personal physician. “I have zero commitments, personally or professionally,” Short said. “But if you ever want to do drugs, I can get you all the drugs.”

“Mr. President, I have lost all credibility,” Bryant told Baldwin over the phone. “Did you lie to me about the Stormy Daniels affair?”

He responded: “Yeah, that sounds like something I would do.”

Cecily Strong as First Lady Melania Trump — donning her much-talked-about all-white suit and hat — also appeared in the sketch, and Leslie Jones and Beck Bennett reprised their roles as Omarosa and Vice President Mike Pence, respectively. So did Johansson as Ivanka Trump, who stood alongside Fallon, who got laughs speaking as a flustered Jared Kushner with a high-pitched voice.

Watch the skit below. 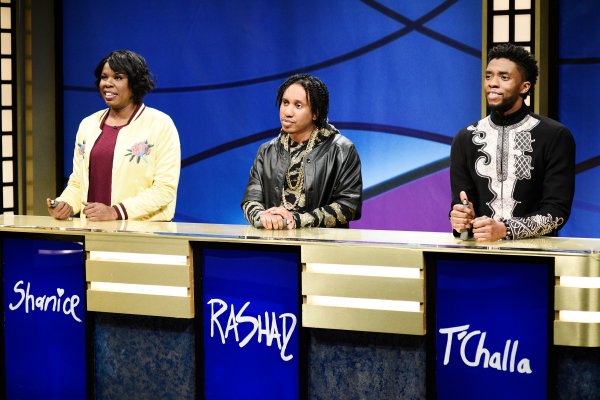