Comedian Seth Meyers didn’t feel comfortable commenting on controversial rapper Kanye West’s opinions of slavery during his show Wednesday night — but luckily one of his writers, Amber Ruffin, was there to step in for the Late Night host and provide some choice insights into the subject.

“My biggest concern is, your words will effect how black children see themselves. You’re telling them that it is their fault that they are at a disadvantage,” she explained, as if speaking directly to West. “So now, I have no choice but to counteract all the harm you’ve done.”

Meyers wasn’t sure how she could possibly combat West’s outsized celebrity influence, but Ruffin had a solution: “By speaking directly to the hearts of young people using the most powerful art form known to man: rap.” Ruffin is, as she admits, not the world’s greatest (or even most mediocre) rapper. But she manages to fit a lot of education into a few lines — even if her ability to rhyme is more or less missing, as Meyers points out.

“To imply that slaves had a choice minimizes slavery,” she raps, “and undercuts the strength of the black community — something that Kanye used to be a part of.” Her closing zinger: “Your music may be fresh, but your views on race are garbage.” 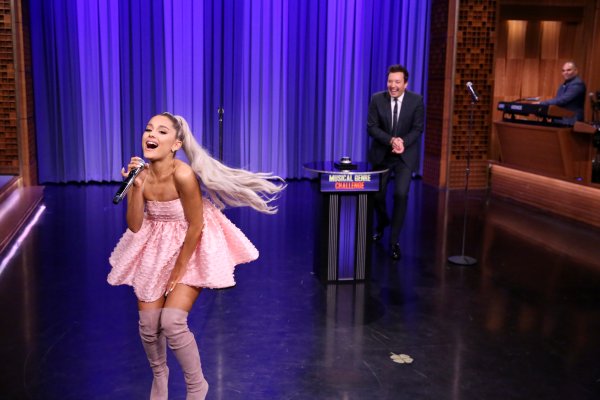 Ariana Grande's Latest Musical Impressions Are a Wild Ride
Next Up: Editor's Pick