The first journey Prince Harry and Meghan Markle take as husband and wife will be horse-drawn, as is tradition.

Harry and Meghan will be going on a horse-drawn carriage ride after their royal wedding on Saturday, May 19, Kensington Palace announced Wednesday morning.

Once Prince Harry and Markle are officially newlyweds, they’ll take part in an elegant carriage procession through the town of Windsor. The carriage will make its way down High Street, Sheet Street, King’s Road and Albert Road before dropping the newly married pair off at Windsor Castle along the Long Walk. Windsor Grey horses will do the actual pulling. And a father and son duo — Storm and Tyrone — will be at the helm. The Escort of the Household Cavalry Regiment will bring up the rear.

Harry’s no stranger to the fancy carriage. He rode in one of the royal family’s Ascot Landau carriage’s when the Duchess of Cambridge married Prince William in 2011.

If it’s raining, the couple will be traveling in the Scottish State Coach. Not to worry about a rainy day though. The windows on the rainy day carriage will be large enough for the crowds to see the star couple. 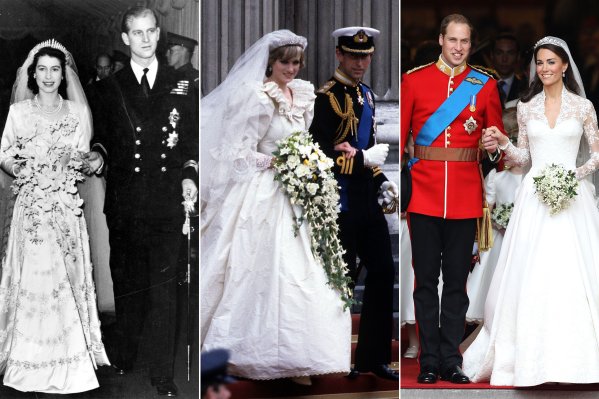 The 12 Most Influential British Royal Wedding Dresses of All Time
Next Up: Editor's Pick