“I really can’t believe how peaceful and beautiful it is.” June Vino is calling from one of Boracay’s sandy white beaches on a Tuesday afternoon, with his friends chatting and laughing in the background. Originally from Manila, 32-year-old Vino has been a resident of the Philippine island for eleven years, but his daily routine has changed drastically in recent days. He has been forced to halt business at his popular rooftop and beach lounge restaurants after President Rodrigo Duterte closed the entire island in an unprecedented move after branding it a “cesspool” earlier this year.

The 7-km-wide haven of Boracay, nestled in the Aklan province of the Philippines, is a perennial feature on ‘World’s Best Island‘ lists for its white sands and azure blue shorelines. Yet since April 26, the ‘paradise of the Philippines‘ hasn’t played host to the usual legions of tourists, bewitched by the Instagrammable images of its stunning vistas. For the next six months, Boracay will be closed to tourists and non-residents following Duterte’s presidential proclamation declaring a “state of calamity” on the island, attributed to waste management problems and environmental concerns.

But residents are scrambling to figure out what the future holds for their livelihoods on the island. “Even now, we don’t know what’s going to happen,” Vino says. “All of us are surprised and shocked.”

Tourism in Boracay generated more than $1 billion last year, according to the region’s tourism office. A record 2 million visitors traveled to the tiny island during the same period, with 22,648 from the U.S. As with many tropical holiday destinations across Southeast Asia, the rapidly growing influx of visitors attracted workers from other parts of the country to take up jobs in the hospitality and leisure sectors, prompting a wave of commercial and construction activity on the island. “In the past five years alone, I’ve seen massive changes,” says Vino. “When I first arrived, it was more of an island vibe, but there have been big hotel developments, heavy traffic and problems with waste management since then.”

The island’s closure was based on the need for “rehabilitation” according to Philippine officials, with the strain of environmental pressures becoming too much for Boracay to bear. Officials said last month that nearly 200 businesses and thousands of local residents are not connected to underground sewer lines and raw waste is pumped directly into the sea. “I agree it should have been cleaned up, it really is filthy,” Lynette Boone, manager of a diving school on the island, tells TIME. “You can see the sewer lines going right out into the water on the beach, and there’s just masses of green algae. It’s not normal.”

Waste and rubbish management, as well as over-development and illegal construction, have been rampant problems according to locals. “The issue of too many tourists and its impact on the environment are a result of years of neglect and bad governance,” says Maria Ela Atienza, Professor of Political Science at the University of the Philippines Diliman. “There were cases of corruption at resorts who were able to get building permits even though they were violating standards, so what is really needed are accountability mechanisms to stop this from happening,” she adds.

Boracay is not the only island in Southeast Asia to be temporarily closed for environmental reasons, although the move is unprecedented in the Philippines. In an effort to protect damaged coral reefs, Thailand in June will shutter Maya Bay, the tourist hotspot made famous by The Beach, starring Leonardo DiCaprio. Thailand also made the decision to close popular dive sites along the country’s shores in 2016 and 2011 in previous efforts to restore the reefs.

Gina Galan, 45, collects plastic bottles on the Boracay dumpsite in the Philippine island of Boracay on April 25, 2018.
Noel Celis—AFP/Getty Images

‘A death sentence for those working there’

“Regardless of what industry you’ve come from, whether you’re a small time vendor or a permanent employee of a big resort, the closure has affected our way of living,” says Monica, a 30-year-old chef working on Boracay. “A lot of people’s morale has gone down.”

While many of the islanders agree that the environmental problems needed tackling, it is the abrupt announcement of Boracay’s closure — just a few weeks before the island was shut down — that has left many without other options for the next six months. “There just wasn’t enough time in telling all the establishments to prepare,” says Mark Gupo, a 31-year-old operations manager at Boracay’s popular pub crawl. In order for his events company to survive, Gupo relocated to Manila at the first rumblings of a shutdown. “I’ve got a family and a baby to care for, so it’s a good thing I had a couple of months of savings,” he says, lamenting that others haven’t been so lucky.

“Our primary concern was for the more than 30,000 people who work on the island that would be displaced,” says Jojo Clemente, President of the Tourism Congress of the Philippines. Clemente says that around 17,000 people in Boracay are directly employed by hospitality establishments, with another 17,000 informal workers making a living from selling boat trips, island hopping tours and vending souvenirs. “Conservatively speaking,” he estimates that the potential losses for Boracay will run into the region of 10 billion Philippine pesos (almost $200 million), having a significant impact on the tourism industry and wider economy across the Philippines.

Critics say the government has ploughed ahead with the closure without a proper plan in place and at the expense of islanders’ welfare.

“Duterte is acting beyond the powers given to him by the constitution and has no power to order the closure of Boracay island,” says Angelo Guillen, a lawyer with the National Union of Peoples’ Lawyers representing two local laborers and one tourist who have taken a petition against the closure to the Philippines’ Supreme Court. They argue that temporary relief should be granted and that rehabilitation is possible without the entire shutdown of the island. “The six month period is a death sentence for those working there and their livelihoods,” says Guillen.

Gina Ruedas, 35, has been a resident of Boracay for almost 10 years and owns a business with her husband making keychain souvenirs. Since the closure, her business has dried up. Ruedas is one of the local recipients of the government’s cash-for-work scheme, where she has been receiving a small salary in return for helping with the island’s clean up efforts since April 27. “It only lasts for 30 days and caters to 5,000 individuals,” she tells TIME. “What will happen next month?”

The government has been providing financial assistance to non-resident workers in need of transportation help to leave the island. However, a stampede broke out on May 1 in the rush to apply, and the aid was halted for several days following the overwhelming demand. The government is also pursuing road widening measures and demolishing houses and structures infringing on environmental areas, with some told to vacate their homes with only a few days notice and no plan for an alternative place to live, Guillen says.

Despite numerous requests, no representative from the Philippines local or national government responded with a comment.

In a further twist, speculation is rife among locals and observers about whether the island is actually preparing for an increased influx of tourists, given the conflicting reports surrounding a rumored $500 million casino development on the island. Despite TIME’s attempts to contact both the Philippine gaming regulator and Macau-based Galaxy Entertainment Group, who are behind the proposed development, for clarification, neither provided a comment on the casino’s status. Some islanders remain skeptical. “There is no assurance for us residents and the marginalized,” says Ruedas. “They are beautifying the island only for the purpose of attracting big investors and making the island exclusive for the rich.”

Policemen take part in a security measures exercise on the Philippine island of Boracay island on April 25, 2018.
NOEL CELIS—AFP/Getty Images

According to Guillen, notices of eviction are being served in the presence of police officers and military personnel, fully armed and in camouflage. “We really fear we are being harassed mentally,” Ruedas says. “It feels like an undeclared form of martial law.”

This paramilitary presence appears to be in keeping with Duterte’s strongman tendencies, most significantly hallmarked by his brutal war on drugs in the Philippines since he took office in June 2016. “On the one hand, you see a decisive national government willing to close an important source of revenue for environmental restoration, but it also projects the image of the administration as strong, uniformed and heavy handed,” says Professor Atienza. “It’s a bit surprising that there are so many uniformed personnel on an island that is meant to be closed for environmental purposes.”

For Boracay’s residents, the closure is both a welcome long overdue chance to restore the island and a source of anxiety as to how many will earn enough money until the tourists return. “Never did we imagine that Boracay would be this quiet,” says David Zerna, a 27-year-old security manager for a five star hotel on the island. “The closure of Boracay is also for the people working here. As they say, endure the pain now, and enjoy the gain later.” For the island’s poorer residents, that pain will be greater than others. 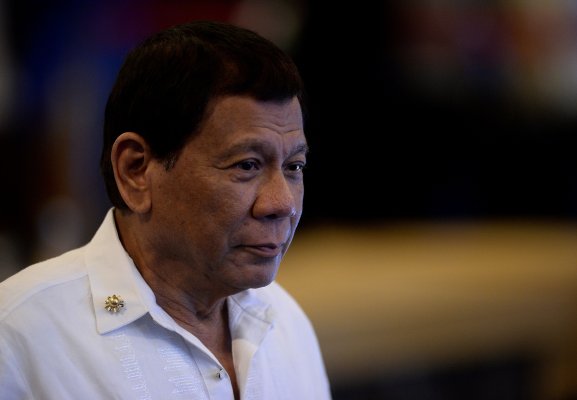 Duterte Didn’t Like When I Called Him a ‘Strongman.’ Here's Why I Stand By My Story
Next Up: Editor's Pick