Amanda Knox on Her New Show, #MeToo and Life After Prison

When American college student Amanda Knox stood trial in Italy for the 2007 murder of her roommate Meredith Kercher, her sexuality came under heavy scrutiny.

Knox and Sollecito, who always denied being involved in Kercher’s murder, were convicted and acquitted twice. She spent almost four years in prison before Italy’s highest court overturned both her and Sollecito’s convictions in 2015. Another man, Rudy Guede, was convicted of murdering Kercher in 2008, and an Italian appeals court rejected Guede’s request for a new trial last year. In 2016, Netflix premiered a documentary revisiting Knox’s case.

Now, Knox wants to draw attention to other women who were shamed for their sexuality and womanhood on her new show, The Scarlet Letter Reports, for Vice Media’s Broadly. The series, which premieres May 2 on Facebook Watch, includes discussions with Amber Rose, who has spoken candidly about her experiences with slut-shaming, and Mischa Barton, who filed a lawsuit against an ex-boyfriend who allegedly tried to leak a sex tape of the former The O.C. star.

Knox spoke to TIME about her new show, the perspective she gained after being released from prison and how the #MeToo movement informed her experiences.

Why did you want to make this show?

I was publicly vilified myself. I originally came up with this idea when I was writing articles for Broadly about women’s experiences in the criminal justice system. One of the things that affected my own experience was the way that the media portrayed me. I would get furious about the tabloids. Even some of my supporters wouldn’t get it. They’d say, “Amanda, you never asked for it, but there are some people out there who did ask for it.”

When we label human beings and flatten them to just a splashy headline, we lose decency and the truth. Our long history of exploiting women’s bodies and suppressing their voices had a direct impact on my case and other women’s lives. This doesn’t just affect famous people — the way we engage with women in the public eye is reflected in the way we treat people in our broader society. The “slut” is given the same treatment on the school ground as the “ho” in the tabloid. We can’t just pretend that this is a thing that affects some people and not other people — that some people matter and others don’t. Everyone deserves context and compassion.

During your trial, did you register what was being said about you as slut-shaming, or did you internalize it?

I was not aware of a ton of the stuff that was being said about me out in the world since I wasn’t able to get British or American headlines from my prison cell in Perugia. But I was aware that in the courtroom, I was being called a succubus, a man-eater, “Foxy Knoxy.” I was accused of orchestrating a rape game. Instead of that sounding absurd, like it should have, it was registering with people.

One of the things that blows my mind about my own case is how easy it was for people to take my frankly vanilla, bland sex life and turn that into deviancy. People were able to explain away problems with their theory of what happened by saying, “Well, she’s a whore, she’s impure, she’s a problem woman.” I felt very voiceless when I was in court, but I also was a kid. I just felt like I had to explain myself. I did a lot of, “Well, let me explain my vibrator” and, “I didn’t have too many condoms in my bathroom.”

Has #MeToo informed your own experiences and the show?

I love #MeToo and what it has been doing for our culture. When I originally pitched my idea for Broadly and they said they wanted to turn it into a show, it was long before #MeToo happened. I thought it was going to be an uphill battle to explain to people why these women’s experiences were important.

I’ve discussed the #MeToo movement with the women I’ve interviewed. Some of them feel empowered by it, and some of them don’t. And that’s because it’s this new moment in our history where we get to redefine what it means to be women. This needs to be a long discussion about how we can evolve as a society, and I hope it’s not a flash in the pan.

How did you choose the women you interviewed?

I feel like the subjects chose me. When we initially started making this show, we reached out to as many people with as many different experiences as possible. We reached out to women of color and LGBTQ people — we didn’t just reach out to the generic, famous white women. We found that some women were ready to talk about their experiences and some weren’t. Some were ready to share their experiences with me and some weren’t. I come to the table as someone who has gone through it, but I also come with the baggage of everything that I carry.

What ended up happening was this incredible dynamic between me and the women — it wasn’t just me seeing them and hearing them, it was also about them seeing me and hearing me. It was a Venn diagram of these experiences that had so much in common and revealed a deeper problem. I didn’t know what these women would be like and what they thought about what they went through. These things happened to these people, but what do they think about what’s happened to them? Their perspective is what has been lost in these stories.

Before these interviews, had you ever had in-depth conversations with people who had similar experiences to you?

When I first came home from prison and I was the girl who was wrongfully accused of murder, I didn’t want that to be my identity. For a long time, I was trying to deny it. I wanted to go back to the life I had before. I went back to school for writing, and what I found was that no matter how many poetry and physics classes I was taking, the truth was staring me right in the face. I had this experience that I had to process.

I first started to do that in poetry class when I started writing about my experiences in a very abstract way. There was one girl in my class who said my poetry resonated with her very strongly, and I felt the same way about her work. We started hanging out outside of class. It wasn’t until we were sitting in front of each other at a cafe, and she said, “I just realized who you are, and that explains so much about why your poetry speaks to me.” I said, “What do you mean?” And she said, “I was gang-raped as a teenager and the trauma that you’re still processing feels like my trauma.” That was the first time that someone pointed out to me that we have something in common. I feel this deep empathy and compassion for women who are experiencing a trauma.

I also have a big foot in the wrongful convictions world, which is an experience that usually belongs, above all, to black men. There are similarities between the way people who are wrongfully convicted and people who say “me too” are denied their own experiences. That has informed my work on this project, and I hope it has made it a more well-rounded, thought-provoking work. I hope the very act of humanizing people who have been denied humanity forces us to question, “How can we do better?” 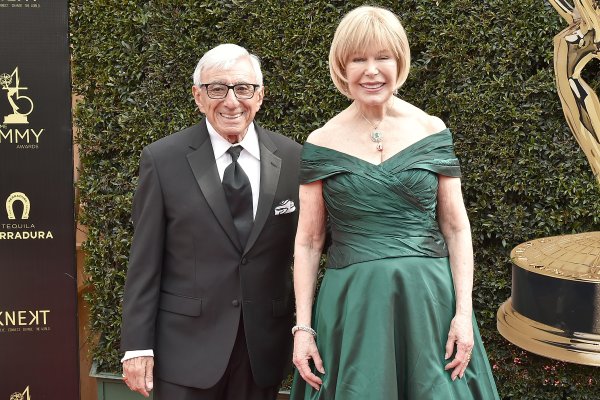 This Reunion of Two Major M*A*S*H Stars Will Warm Your Heart
Next Up: Editor's Pick