Jogging may have been the first great exercise fad to sweep the nation, but for many people looking to get into shape, cardio work, especially when done in public, only held so much appeal. The workout routine that captured Jane Fonda’s attention was more intimate — just an instructor leading a small group in a series of stretching, stepping and reaching routines. In 1979, Fonda and a fitness instructor opened their own aerobic exercise studio in Beverly Hills; Fonda herself even led some classes. In just a few short years, the fitness and aerobics movement wormed its way out of California and into pop culture.

Aerobics also attracted those who wanted to skip the gym entirely. The late 1970s had seen the introduction of home video systems, and following the success of her book, a producer ap­proached Fonda with the offer to produce a VHS version of her workout. Baby boomers too shy to do leg lifts, neck rolls, or step and kicks in public could now do so in the privacy of their liv­ing rooms, while over scheduled stay-at-home moms and career women could avoid the hassle of attending fixed-time classes. Fonda wasn’t just another lithe ingenue, either; she was in her mid-forties. It was the final piece in her more or less single-handed elevation of aerobics to a national fad. But amid the leg warmers and the high-cut striped unitards Fonda and her companions wore in the video, one detail had gone overlooked: they were all barefoot.

Kicks: The Great American Story of Sneakers
Courtesy of Crown

Angel Martinez noticed that. He was a sales rep on the West Coast for Reebok, a British brand introduced to the United States only a few years before. He was driving back to San Francisco after a failed sales trip. Reebok was producing a few models of well-received running shoes, but now that the running boom had crested, stores were paring back their offerings, often carrying only established brands such as Nike, Tiger and Puma. On the way home, Martinez paid a visit to his wife’s new exercise class, which he’d heard was a fad growing out of the West Coast. The at­tendees complained of leg and foot pain; many exercised barefoot on carpeted floors, hardwood or concrete. The answer clicked. “Aerobic shoes,” he said to himself.

When participants in aerobics classes did wear sneakers, they were appropriated from other sports. “Shoes must allow for side­ways movement,” said the fitness pioneer Jacki Sorensen in 1981. Jogging shoes were totally inadequate; tennis shoes were better. When Martinez, an avid runner who knew the importance of purpose-built footwear, presented his idea of an exercise shoe to Reebok chief Paul Fireman, it was rejected. Fireman had never heard of aerobics. Martinez persisted and sketched a sneaker on a napkin; he took it to another Reebok executive, who ordered a prototype to be manufactured in East Asia. Martinez took the prototype to fitness instructors, who loved it. After more cajoling, Fireman was convinced. The first shoes came back from the fac­tory with a wrinkle around the toe, which the factory owner apologized for in a letter, saying they were working on correcting the mistake. The Reebok executives loved the wrinkles, however, which made the shoe resemble a ballet slipper. They ordered the factory to put the wrinkles back in, a process that took months.

In 1982, the Reebok Freestyle fitness shoe hit the shelves. The Freestyle didn’t look like anything Nike, Adidas or Puma was making at the time. For one, it wasn’t bulky, especially showy, or packed with technological gimmicks; in fact, it appeared flimsy. It came in white but was also available in the unfamiliar shades of pastel pink and blue. The upper was made of garment or glove leather, much softer and more pliable than the leather used for other sneakers at the time, hence the wrinkles around the toe. Freestyle wearers found them so comfortable that they didn’t need to be broken in. The most distinctive feature of the high-top variation of the sneaker was the three poufy ankle supports and the two thin Velcro straps to keep them in place.

Fireman ordered 32,000 pairs of the Freestyle, a big gamble. Sales were quiet the first week, until Martinez came up with a pro­motion that offered two free weeks at a Richard Simmons fitness class with each purchase. The 32,000 pairs sold out in a matter of days. Reebok didn’t even have to court aerobics’ one bona fide celebrity, Jane Fonda; she was already wearing the Freestyle in her later exercise videos because they happened to be the most popular.

Excerpted with permission from KICKS: The Great American Story of Sneakers by Nicholas Smith. Published by Crown, an imprint of the Crown Publishing Group, a division of Penguin Random House LLC. Copyright 2018 by Nicholas Smith. 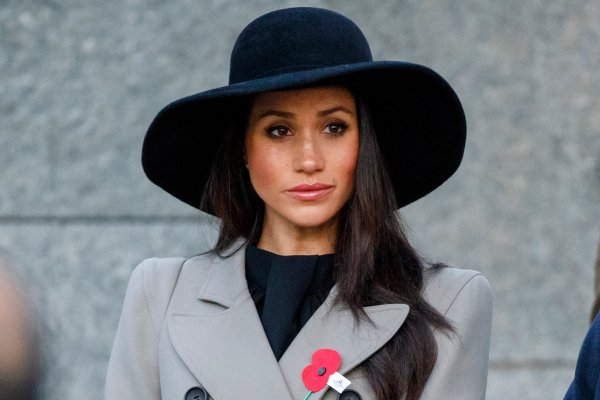 Meghan Markle Was Destined to Be the Ideal 21st-Century Princess
Next Up: Editor's Pick