'Our Hands Are Already Full.' For Young South Koreans, the Inter-Korea Summit Is Just Another Thing to Worry About

A couple walk through a park in Seoul on March 24, 2016.
Ed Jones—AFP/Getty Images
By Charlie Campbell / Seoul

History weighs heavy over Friday’s meeting between the leaders of North and South Korea. The talks bring together Kim Jong Un, grandson of North Korea’s founder Kim Il Sung, and South Korean President Moon Jae-in, the child of refugees who fled the North during the 1950-53 Korean War. The setting is also significant; the demilitarized zone, or DMZ, is a narrow strip of land that has separated the two nations since that Cold War conflict ended in a prickly stalemate.

On one level, this is a summit between two leaders striving to fulfill their forebears’ legacies: Kim’s mission to safeguard his dynastic regime; Moon’s to reunite the riven peninsula. But Pyongyang’s development of a nuclear-armed missile capable of striking the U.S. mainland has hauled Washington into the reckoning, with U.S. President Donald Trump poised to meet with Kim in coming weeks for what would be the first ever meeting between leaders of these longtime adversaries.

Another historic moment, to be sure. But for many younger South Koreans with no recollection of the two nations united, the talks are an irritation piled onto mounting domestic pressures, such as record youth unemployment, an aging and declining population, sluggish growth, and corruption scandals involving the nation’s highest office. “We don’t want North Korea to be part of the agenda,” says Minyong Yoon, 25, a computer science student from the city of Suwon outside Seoul. “Our hands are already full.”

Read more: Can South’s Korea’s Moon Jae-in Pull the World Back From the Brink of War?

Seoul’s Hanyang University, where TIME met Yoon and a group of his fellow students, occupies a manicured campus befitting its reputation as South Korea’s equivalent of MIT. With a focus on engineering, alumni include current board members of multinationals Samsung, LG and Hyundai, as well as a bevy of politicians, artists and sports stars. But what unites all students is a desire to forge the future — and North Korea is conspicuously absent from their vision.

A survey last year by the government-run Korea Institute for National Unification found that 71.2% of South Koreans in their 20s oppose reunification. Across all age groups, support has dropped to just 57.8% from almost 70% four years prior. “For the younger generation, North Korea is no longer important,” says economics student Somin Yoon, 23, from Seoul, and no relation to Minyong.

These views chafe with a recent flood of ostensibly good news. On Saturday, North Korea announced it would immediately suspend nuclear and missile tests, dismantle its nuclear test site and prioritize economic growth. In response, South Korea turned off propaganda broadcasts at the DMZ. Kim Jong Un has also suggested that the withdrawal of U.S. troops from South Korea wouldn’t be a precondition for nuclear disarmament. President Moon called the move “a significant decision towards total denuclearization of the Korean peninsula.”

But Hanyang students are unassuaged, saying too much time has already been sacrificed to the past. All South Korean men between 18-35 must complete two years of national service, which feels like time snatched away while they are in their prime. The training and drills that comprise this obligation fortify the idea that North Korea is an existential enemy.

While the division of the Koreas is a painful memory for their parents’ generation, Hanyang students mainly feel apathy. Only 2.5 miles of barbwire and minefields divide these lands, but culturally it’s a chasm: K-Pop and cosmetic surgery versus goose-stepping collectivism; bullet train and smartphone versus bullock cart and whip. “In terms of geography, it’s the closest country, but diplomatically it’s the furthest; we cannot just visit North Korea,” says Hanju Kim, 21, from Seoul, and no relation to Yu Kin.

A man walks past a military fence covered with ribbons calling for peace and reunification at the Imjingak peace park near the Demilitarized Zone (DMZ) dividing the two Koreas at the border city of Paju on Jan. 8, 2018.
Jung Yeon-Je—AFP/Getty Images

Compounding matters are the enormous pressures South Korea puts on young people. The school year lasts 11 months and students often spend 16 hours a day in class and afterschool study sessions called hagwons. South Korea has the highest suicide rate in the world for children aged 10-19. During Minyong Yoon’s final year of high school, “I slept for only four or five hours a night,” he says.

Japanese and American culture has seeped into South Korean society, while the North remains ossified under Stalinist indoctrination. Interactions with the 32,000 North Koreans who have made the perilous journey to South Korea reinforce the differences. “Having a whole bunch of brainwashed people wandering around the country just isn’t good for us,” says Hanju Kim.

Defectors gain preferential access to university though affirmative action programs, which breeds resentment. Hanju Kim says there are one or two defectors in each grade of his public administration degree course, accounting for about 2% of all students. But they “definitely struggle” because of mandatory English courses, he says, adding, “they also have some problems understanding our professors’ language.”

For many students, the idea of opening the floodgates to North Koreans is almost as unpalatable as war. Reunification would be prohibitively costly for the world’s 11th biggest economy, not to mention the significant social and security problems. North Korea’s GDP is less than 1% of that of the South, meaning uniting the nations would involve many times the burden of binding East and West Germany in 1990. (Even a quarter of a century later, former East German provinces lag behind in most developmental metrics.) “As an economist, I have to weigh the benefits versus the cost allocation,” says Somin Yoon. “And it just doesn’t add up.”

But not all agree. Soojin Oh, a 23-year-old tourism student, favors reunification, though admits it is a minority view within her peer group. “If reunification means we would be linked to Russia and continental Europe then Korea will become truly part of the globe,” she says. “And we would have peace dividends owing to reducing our military costs.”

After Kim and Moon sit down Friday, the next step will be a meeting between the despot and the irascible Trump, who even threatened to “totally destroy North Korea” while speaking at the U.N. Earlier this month, hawkish CIA chief and Secretary of State nominee Mike Pompeo reportedly met with Kim in Pyongyang to draw up parameters for the meeting with Trump. National Security Adviser John Bolton, who has frequently advocated for preemptive strikes against both North Korea and Iran, joins Pompeo in Trump’s combative new-look inner circle.

The prospect of the former reality TV star Trump, who came to power bellowing “America First,” dictating South Korea’s future security with a cabal of saber-rattlers is understandably galling. When Trump and Kim exchanged barbs late last year, “It looked like UFC or World Wrestling Entertainment,” says Minyong Yoon. “They just want to show how big and strong they are to their own people.” Hanju Kim agrees: “It was like childish bragging.”

It’s hard not to sympathize. Koreans have rarely held the levers of their own destiny. Since the 13th century, the peninsula has alternated between Chinese and Japanese occupation, and following World War II was split down the 38th parallel. But unlike Germany, which suffered a similar fate in retribution for Nazi aggression, Korea never invaded anywhere — it was scythed apart simply because of the rivalry between Soviet Russia and its erstwhile Western Allies.

Today, the Korean people sit on the frontline as a mercurial U.S. President fires off the occasional 280-characters of vitriol on social media. And despite Trump’s bluster, Hanyang students — who would likely be called upon to fight if conflict broke out — don’t believe the U.S has the stomach to stay the course, pointing to how the hippie movement catalyzed Washington’s withdrawal from the Vietnam War.

“America in all its history has never been bombarded on its own [mainland],” says Yu Kin Kim. “The North Koreans think that were they to land a direct hit on America itself, then just maybe like Vietnam there will be anti-war protests because they’ve never been in the situation of war [in their homeland.]”

It all leaves Yu Kin Kim fatalistic about the future, believing that South Korea waging war on its own terms may be preferential to having its fate decided by an unreliable Washington, or the purgatory of waiting for the next escalation. “Otherwise, it’s like living every day with a big gun to the back of your neck,” he says grimly. “And I really don’t want to live like that.” 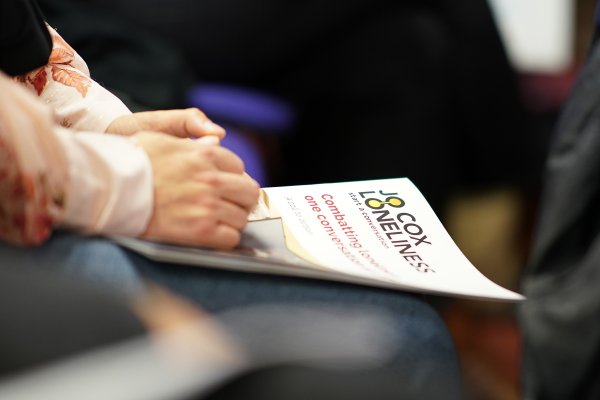 How the World's First Loneliness Minister Will Tackle 'the Sad Reality of Modern Life'
Next Up: Editor's Pick