Video footage posted on social media Monday shows the arrest of the suspect linked with a van attack in Toronto, which left multiple pedestrians dead and injured earlier in the day.

In one video taken from a car on the street, a Toronto Police Service officer can be heard shouting, “Get down! Get down!” at the suspect, who appears to be wielding a firearm. The suspect, identified as Alek Minassian, said he had a gun in his pocket, and yelled to the officer to “shoot me in the head.”

As the officer issues multiple warnings with his own firearm drawn, the two stand off until ultimately suspect drops the object in his hands and lays on the ground to submit to arrest.

Another video shows the same scene unfold, this time from a building above.

Authorities have not yet identified the suspect or his motive. It is unclear whether officials have characterized the incident, in which the driver plowed through pedestrians on the street with the van, as a terror attack.

Ten pedestrians were dead as of Monday evening; 15 were injured. “Our thoughts are with all those affected by the terrible incident at Yonge and Finch [Streets] in Toronto,” Canadian Prime Minister Justin Trudeau said in a tweet. “Thank you to the first responders working at the scene – we’re monitoring the situation closely.” 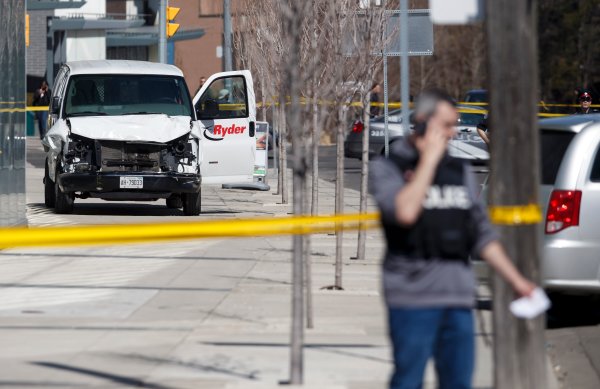 Victims of Toronto Attack Are Mostly Women
Next Up: Editor's Pick