Ten people were killed and 14 were injured when a man plowed a van into a crowd of pedestrians on a Toronto sidewalk Monday afternoon in what Canadian Prime Minister Justin Trudeau called “a senseless attack and a horrific tragedy.”

The driver, identified by authorities as Alek Minassian, was charged Tuesday morning with 10 counts of first-degree murder and 13 counts of attempted murder. Homicide Detective Sergeant Graham Gibson of the Toronto Police Service said he is anticipating a 14th count of attempted murder to come.

“This is a time when this community should come together,” Toronto Mayor John Tory said at a press briefing on Monday. “I hope that we will, as a city, remind ourselves of the fact that we are admired around the world for being inclusive and for being accepting and understanding and considerate, and that we are united in standing in solidarity, especially with those who have fallen victim to this terrible tragedy today.”

The identities of the ten people killed in the attack are emerging. Toronto police say most of the victims are women, although they declined to say the suspect was specifically targeting women. Among those identified thus far are am 80-year-old grandmother, a Jordanian-Canadian citizen and an employee at an investment firm who had a passion for volunteering.

Two South Koreans were slain and a third injured according to Yonhap News Agency, AP reports A female student from Toronto’s Seneca College was also killed, the school confirmed, but her identity has also not been revealed.

Anne Marie D'Amico, who was identified by Toronto City Councilor Cesar Palacio on April 24, 2018 as one of the victims of of a van attack in Toronto, Canada.
Tennis Canada—AP

“I can now confirm that unfortunately one of our employees has succumbed to her injuries,” Peter Intraligi, the president of Invesco Canada, the company she worked for, said in a statement. Out of respect for her and her family, we will not be providing any further comments.

CTV News reports that D’Amico was voted Tennis Canada’s Volunteer of the Year in 2016 for her passionate work with the Badminton and Racquet Club of Toronto. She also volunteered with the charity Live Different.

Dorothy Sewell, an 80-year-old grandmother and dedicated supporter of Toronto sports teams, was also identified as a victim in Monday’s attack. Sewell’s death was confirmed by her grandson, Elwood Delaney of Kamloops in British Columbia, according to the Associated Press. He wrote on Facebook that his mother had almost as much affection for the Blue Jays and the Maple Leafs “as she did for her family.”

The restaurant chain confirmed his death in a statement to Global News “with great sadness.”

The company’s director, John Paul Mannella, said, “There are times when it is necessary to communicate news that is painful. It is in these times where were must all be prepared to comfort each other as we deal with the many emotions that we may experience.”

Munir Abed Alnajjar was a Canadian-Jordanian citizen and the father of the director of the Arab Canadian Orchestra, Omar Al-Najjar, according to CTV News.

The AP reports that Alnajjar, who was in his 70s, may be brought back to Jordan for burial.

Ten people were killed in the attack

At least 10 people were killed when the van plowed onto the sidewalk, and an additional 14 people were injured, authorities said at a press conference on Tuesday afternoon. Police had initially said there were 15 people injured, but they said Tuesday that was a miscount.

Gibson said Tuesday that the victims were “predominantly female.”

Five people remain in critical condition at Sunnybrook, two are in serious condition, and one is in fair condition, Sunnybrook said.

Suspect Alek Minassian has been arrested

Police have taken the driver — identified as 25-year-old Alek Minassian — into custody. He appeared in court on Tuesday morning and has been charged with 10 counts of first-degree murder and 13 counts of attempted murder. He did not enter a plea, the Associated Press reported.

Authorities have not yet determined a motive

“At this time, we have no reason to suspect that there is any national security element to this attack, but obviously the investigations continue,” Prime Minister Trudeau said at a press conference Tuesday morning.

Vehicles have been used as a deadly weapon in some recent terror attacks. A man in a pickup truck hit several pedestrians in New York City in October, killing eight people and injuring others. In Nice, France, 86 people were killed after a man drove a truck into a Bastille Day celebration in July 2016. And at least 13 people were killed when a van plowed into a crowd of people in Barcelona in August 2017.

Gibson said Minassian rented the van he drove on Monday morning and allegedly posted a “cryptic message on Facebook minutes before he began driving the rented van.” Gibson declined to elaborate further on the Facebook post. But Minassian had written a post praising Elliot Rodger, who killed six people at the University of California, Santa Barbara in 2014. Rodger had written a manifesto in which he said he sought to “punish all females for the crime of depriving me of sex.”

While Gibson said the victims of Monday’s attack were “predominantly female,” he said he did not know if Minassian had deliberately targeted women. “At this stage we have no evidence of that occurring,” he said at Tuesday’s press conference.

The incident came as foreign ministers from the Group of Seven gathered in Toronto ahead of the G7 summit in Quebec in June.

Canada’s Minister of Foreign Affairs Chrystia Freeland sent her “tremendous sympathy and sadness” to the families of the victims.

“The events that took place yesterday in Toronto were a senseless attack and a horrific tragedy,” Prime Minister Trudeau said at a press conference Tuesday morning.

“Obviously, we need to continue to reflect on the changing situations in which we’re in and do everything we can to keep Canadians safe,” he added. “But we cannot, as Canadians, choose to live in fear every single day as we go about our daily business. We need to focus on doing what we can and we must to keep Canadians safe while we stay true to the freedoms and values that we all, as Canadians, hold dear.”

The White House released a statement late Monday, saying the U.S. “stands with the Canadian people in the aftermath of today’s traffic event” and pledging “to provide any support Canada may need.”

“Our thoughts and prayers go out to the families of those affected, and we wish a full recovery to those injured,” the statement said. 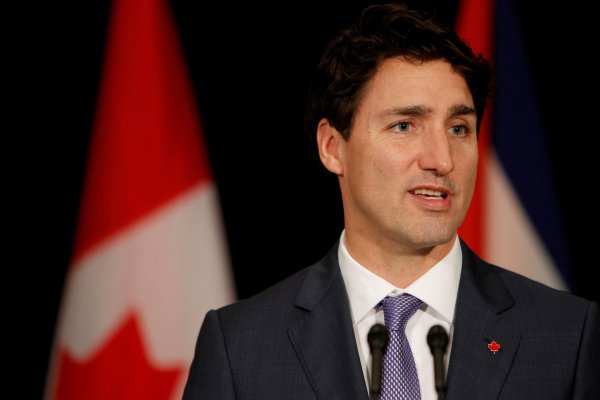 Canada Recalls Families of Diplomats in Cuba
Next Up: Editor's Pick