The Royal Baby Was Born on St. George's Day. Here's Why That's Significant

After weeks of anticipation, Catherine, the Duchess of Cambridge, and her husband Prince William have welcomed the birth of their third child — a baby boy, born on none other than St. George’s Day, the day of England’s patron saint.

The baby boy (Kate Middleton and Prince William have not announced his name yet, though oddsmakers are betting on Arthur, James or Albert) was born weighing 8 pounds, 7 ounces, Kensington Palace announced on Twitter Monday morning. According to a statement from the Palace, “her Royal Highness and her child are both doing well.”

It is significant that Middleton and Prince William’s third royal baby was born on April 23, a day which celebrates England’s patron saint, a Roman soldier who is thought to have lived in the third century AD. According to Encyclopaedia Britannica, St. George was tortured under Roman Emperor Diocletian’s persecution of Christians in 303, but he refused to give up his religious beliefs, making him a martyr and Christian hero.

Many associate St. George with the mythic tale of George and the Dragon. There are many different versions of the legend, but one holds that St. George offered to rescue a Libyan king’s daughter from a dragon in return for the king’s subjects converting to Christianity. These extravagant, J.K. Rowling-worthy tales of George and the Dragon date back to the sixth century and have been depicted in several famous paintings and poems.

Currently St. George’s Day isn’t celebrated as a national holiday (or “bank holiday”, as they’re known in England). However, Jeremy Corbyn, the leader of the center-left opposition Labour Party, has pledged to make St. George’s Day (as well as the days of the patron saints of Wales, Scotland and Northern Island) a public holiday if his party wins the next general election.

This would mean British workers could add April 23, as well as St David’s Day (March 1), St Patrick’s Day (March 17) and St Andrew’s Day (November 30) to their list of annual public holidays, which currently stands at eight. 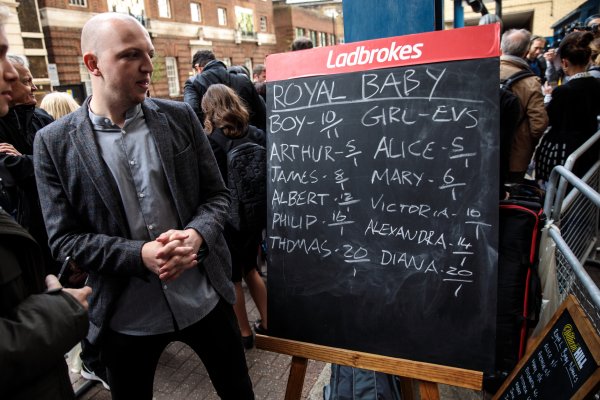 Kate Middleton Welcomed a Baby Boy. These Are His Most Likely Names, According to Oddsmakers
Next Up: Editor's Pick