'It Was Very Natural.' The Story Behind the Viral Photo of 4 Former Presidents and First Ladies

Among the images that emerged from the private funeral of Barbara Bush, the former First Lady to the 41st President and the mother of the 43rd, on April 21 is this now-viral grouping of four former commanders-in-chief and First Ladies.

The picture was later tweeted by Jim McGrath, a former speechwriter for President George H. W. Bush who now serves as his spokesman, and garnered commentary throughout the rest of the weekend. Some of the discussion focused on President Trump’s absence — a bid to avoid security disruptions, the White House said — while others were pleased to see a moment when politics are set aside.

It touched a nerve: Democrats and Republicans were embracing, smiling and enjoying the company of one another. As one user wrote, “this is the beauty of the idea that is the United States of America.”

So how did that scene come together? Photographer Paul Morse explained in a Monday morning phone call that after he was invited by McGrath to photograph the service, he approached it no differently than how he treats other events involving presidents or first ladies.

Morse, formerly with the Los Angeles Times, served as an official White House photographer and deputy director of photography during George W. Bush’s administration. He later started his own event photography business and worked not only with the Clinton Global Initiative, but also the George W. Bush Presidential Center.

“Just be ready, technically” he says of these kinds of shoots. That means plenty of memory cards and batteries that can be seamlessly popped in and out of cameras — without missing the action — “because things can’t stop for me,” he adds. “Things happen relatively quickly and fluidly in that environment. I knew a lot of the personalities already, and I knew they’d come and want to say hello to ’41,’ as they call him, so I just put myself near him for most of that morning.”

This particular image was made before the service, Morse says, when the former heads of states and other special guests were arriving. They had gathered at a reception beforehand.

“I was just trying to keep an eye behind me to see who was arriving and watch people greet 41. I’m always looking around, always observing, to anticipate who may come up to him and try to think about each story behind the person who’s greeting him,” Morse says. “I was particularly interested in seeing President Clinton because I know they have a very special relationship since they’ve left office.”

When it was time for the service, he says everyone began lining up to be ushered to the church. The mood in the room was “very upbeat,” Morse recalls, likening it to more of a celebration of life. “Once it was trimmed down to the former presidents, they were the last ones to go in, Jean Becker [the elder Bush’s chief of staff] wanted to do a picture. It was just a matter of them coming together,” he says. “It was very natural and not forced at all. They were very happy to do that.”

As an event and wedding photographer, he’s used to group portraits. But, he says, “I didn’t think I was going to make that picture.” Morse credits Becker, who “did an amazing job and calmly organized everyone. I knew it was going to be important but I kind of let the people in charge usher people together.”

“What I find is you have to shoot as many frames as there are people in the photo to make sure you have everyone’s eyes open and they’re looking at you,” he says. “All those presidents and first ladies are professional. It wasn’t too hard.” By that rule, with eight people in the picture, he estimates that he only had time for about four pictures before the group headed into the service.

He checked the back of his camera immediately to make sure he got something that worked. Later, he downloaded the images from his memory card and touched up a little of the color before sending it to McGrath, who would release the image.

Morse only “glanced a little bit” at some of the commentary that followed. Asked what he hoped viewers would take away, he was succinct: “They are real people … I think it really says a lot about the kinship that this very select group of people has for each other,” he says. “They’ve all served. It’s not so much about the politics at that time. It’s about honoring a very select member of that club.” 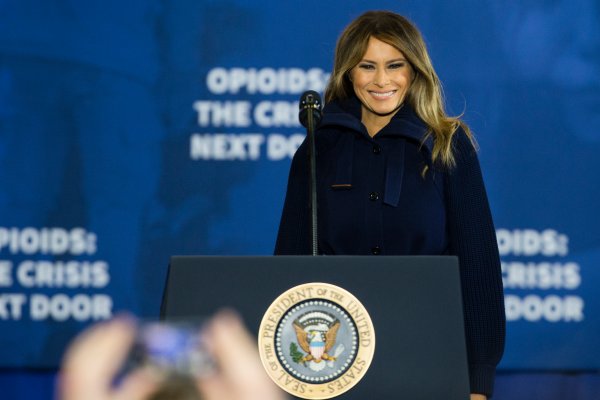 Melania Trump Is Using Ingredients From Michelle Obama's White House Garden at Her First State Dinner
Next Up: Editor's Pick