Shawn Mendes is not even 20 years old, but he has already cemented his status as one of the world’s most popular musicians, across generations.

At the TIME 100 Gala on Tuesday night, Mendes — who also was featured as one of the 100 influential individuals himself — took to the stage to perform for his fellow honorees, artists, celebrities, and changemakers. (Also in the audience: noted superfan Adam Rippon.)

He sailed through songs like megahit “There’s Nothing Holdin’ Me Back,” as well as “Lost in Japan,” “Mercy” and “Stitches.”

He also sang new release “In My Blood,” a soulful pop-rock anthem about uncertainty and overcoming — a poignant topic for a young artist. “Someone help me, I’m crawling in my skin,” he crooned to the crowd. “Sometimes I feel like giving up, but I just can’t.”

When TIME caught up with him after his performance, he explained the emotional back story of the track.

“Growing up as a kid I didn’t really understand what anxiety was. Then all of a sudden, two years ago it really hit me like a brick,” he said. “I had lots of moments of anxiety, but there was this one insanely strong moment, and I remember writing it down in my journal. When we wrote that ‘duh nuh nuh,’ it gave me the same feeling as ‘Fix You’ by Coldplay, and I was like ‘What is it, what is this emotion that it’s evoking for me? And I screamed out at one point, ‘It isn’t in my blood!'”

For Mendes, it was a true a-ha moment. “All these things attached. That’s how songwriting works. When it’s time, your brain puts it all together for you.”

Mendes, who released his last album Illuminate in 2017 and had a double-platinum hit last spring with “There’s Nothing Holdin’ Me Back,” is now leading up to his third album release expected sometime this summer. “He knows his right to stand on that stage is every bit as real as mine is,” fellow rock star musician John Mayer wrote about Mendes in his TIME 100 profile, nodding to the young performer’s power. 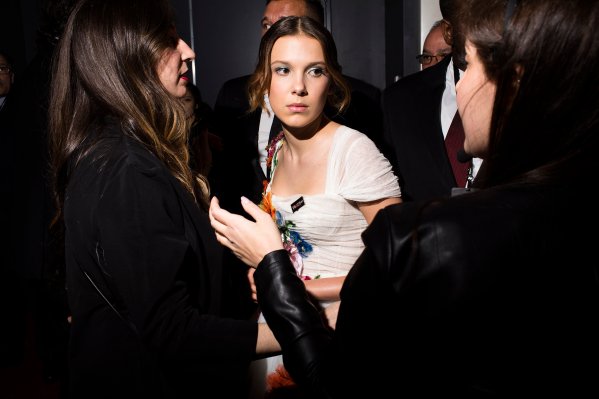 Millie Bobby Brown Finding Out Cardi B Wasn't at the TIME 100 Gala Is So Good It's Supernatural
Next Up: Editor's Pick