Pop songs are all about production. But in the new Ed Sheeran documentary Songwriter, screening at the Tribeca Film Festival in New York City this week, the raw footage is what matters most. Director and filmmaker Murray Cummings, Sheeran’s cousin, has been on the road with the Divide singer-songwriter since he was just starting out. In early days, Sheeran would often crash at his London flat after small gigs.

Originally a music video director, Cummings became Sheeran’s on-the-road video guy. He’s captured the hitmaking artist in scenes around the world: recording at the famous Abbey Road studios in London, heading across the Atlantic on a ship with the airplane-averse producer Benny Blanco and struggling to find the right lyrics for Justin Bieber’s “Love Yourself” while wearing pajamas on a tour bus. The resulting film, Cummings’ first, is an intimate look at Sheeran as an artist and a pointedly unpolished take on the celebrity documentary.

“I just wanted to show the Ed that I see every day,” Cummings explains to TIME. “Dressed down, chilling out, writing a bunch of songs, hanging out with his mates — who are luckily a bunch of really good songwriters.” Those “mates” include Snow Patrol’s Johnny McDaid, pop prodigy Julia Michaels and Blanco, all of whom contributed to tracks like “Nancy Mulligan,” “Dive” and “Barcelona.”

If Sheeran is the everyman of pop music, then Songwriter is the equally casual film version of its star. (Although Cummings might take issue with calling Sheeran a “star” in the first place.) There’s no voiceover, no interviews, no personal drama: just a single-minded interest in showing the process of making music. “Instagram Stories, Snapchat, all that stuff — people are getting dropped into people’s worlds immediately now, and they don’t go ‘Hey, I need some context,'” Cummings reflects. “You don’t need to set up a lot anymore. I wanted the audience to feel like it was happening around them.”

The film offers glimpses of Sheeran and his talented collaborators riffing on guitars, humming over mugs of tea and ultimately culling together a record-breaking track list for the spring 2017 launch of Divide. (Remember “Shape of You?” That was a last-minute addition.) With its slim hour-and-a-half run time, Songwriter is more visual artifact than story. As Sheeran says, “songs are weird things. They just come and go, and never give you any warning.”

TIME spoke to Cummings about his fly-on-the-wall perspective and making a documentary that speaks for itself.

TIME: How did this documentary come to be?

Cummings: This is my first film. I studied multimedia, and there was this one thing where the teacher said, do whatever you want. I wasted all my time, and when it came to the deadline I had nothing, so I borrowed my friend’s camera — he had a song. We made a video that night, edited it that night, turned it in — and it was the best grade I’d ever gotten. So then I wanted to be a music video director. I moved to London and worked in that world.

So when did you start working with Ed?

Around that time, Ed was a teenager getting pretty serious about gigging, and he wanted to leave school and move to London. I was older than him, so was like, “You can crash on my couch.” If I was free, I would come and film his gigs. I would also give him footage for his Myspace page — it was that era. We had a chat, “Wouldn’t it be cool to make a documentary starting now and filming everything?” Ed had big ambitions. He wrote “You Need Me, I Don’t Need You” when he was like 15, 16. There’s lyrics in there that say, “I won’t stop till my name’s in light…” And I was like, “Right, you’ll do it and I’m gonna film everything.” Then when his first music came out, he blew up in the U.K. So I got a job with him. When he signed a record deal, he asked me to come on the road.

When was the moment that you realized Ed could be a big star, and that you could be a part of that?

I believed him. When he first asked me to film him, he was performing and asking the audience if he could stay on their couches after the gig. He’d say, “I have nowhere to stay tonight, but I’ll sing to you in your living room if you give me a couch to sleep on and a cup of tea in the morning.” I thought that would be so weird and cool as a little documentary — this guy going to all these houses. But when his first single came out, it went to number three on the U.K. charts like instantly. So he got a tour manager and started staying in hotels, even though they were budget hotels, two of us in the same room. But the original plan was to make something a lot different.

Fast forward to the making of Songwriter. What was the process of piecing together the footage? When did you decide how to narrow the focus?

We wanted it to be all new footage that the fans hadn’t seen in another Ed Sheeran project before. With it being about the timeline of the Divide album cycle — but also going back to show his music education — that helped me a lot. With Divide it really was luck of which songs I was there for that ended up making the album.

When you’re in the room as a song is being written, can you tell that something’s going to be a hit, or at least make it to the album?

To me, it’s always interesting to see its life and where it ends up. There will be some that I’m absolutely wild about. And by the end of the year, you see it fall down the pecking order and not even be on the deluxe. It’s not about whether it works on its own —it’s how it compares to the others. He’s very much making an album, not a collection of singles. I can tell which ones I like, but I really can’t tell what’s going to be hits. And I don’t think Ed can either. He always says, the public will decide if they like it or not. It’s my job to make the songs, and not to dictate what people’s taste will be.

Was there anything that Ed wanted you to leave out?

No. He was really leaving me to it. Ed always knew this was my plan, but I was doing it under the radar. I wanted to finish it first and be like,”Can I release this?” So that’s what happened. It’s pretty much the [same] film that’s getting released. Ed wanted to make the final montage a bit more fun for fans, a bit more on the road stuff, but it was pretty basic.

What was his first response to seeing it?

He really liked it. He was really happy with it! I was very nervous.

There have been a number of celebrity album documentaries — Lady Gaga, Demi Lovato — which explore the artists’ dramatic personal lives and how they track against their musical evolution. But your approach is different. Why did you want to focus so tightly on Ed as a writer?

I’ve been given this unique opportunity to witness someone who’s writing songs that go all over the world, and I have a camera in my hand. Every time I would sell footage to MTV or someone who would put together an Ed Sheeran thing, when I’d watch it I’d be like, “Oh, that’s not what I found interesting.” They were looking at it differently. And then I realized they were looking at him as a “star.” All of the stuff was making him look more like other stars. That’s what seems to be in common with the other films; they’re all the star.

I didn’t want to try to go over the top. There’s big production behind other films and other artists. But I’d just rope in some friends and my brother to help film if I needed another angle or something. I didn’t want to get over-ambitious and make it look really slick, or to try and write in some drama and put a magnifying glass on something that isn’t actually that big a deal. That’s an art that I don’t know how to do. What I do know how to do is represent Ed well in a way that I witness every day, and make it real.

What was your favorite song that you got to see the process of making?

“Dive” and “Happier,” I think. Also “Perfect” with the orchestra is hands-down the best, because I was in the room with the orchestra [when they were recording live]. Being there is so powerful with all the instruments hitting you at the same time. There I am trying to be professional and get my sh-t done, but I’m just loving it. Let’s do another take just so I can hear it!

And Ed brought his brother in to help out with the orchestral arrangement of that one, too.

I’m very lucky I was able to film, because his brother’s a very private person. His brother really helped me out by saying that he wanted it filmed, because it was such an important moment to get on camera, Ed playing with an orchestra. You don’t get to do that every day. Especially at Abbey Road where the Beatles made Abbey Road.

You’ve spent a lot of time with Ed on the road. What is the most surprising thing that people don’t know about him?

Ed’s kind of an open book, so I’m pretty sure everyone knows exactly what he’s like. And if you don’t, he tells you all in his music anyway. That’s something I struggle with actually — if they want to know anything about him, they can just listen to his songs, they don’t have to really watch the documentary [laughs]! But to answer your question, people would always say, “Oh, it must be so rock ‘n’ roll being on the road.” But to be honest, me and Ed, when he finishes a gig, we get a bottle of wine and a box of cheese, and we just go to the back of the tour bus and watch The Simpsons. Not very rock ‘n’ roll at all. 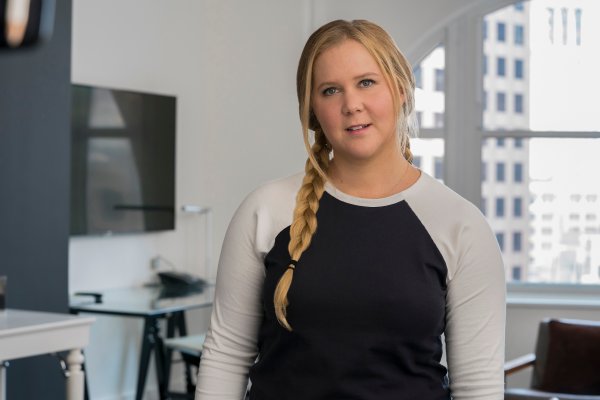 Review: Amy Schumer Gives I Feel Pretty Its Confidence and Charm
Next Up: Editor's Pick