Paul Ryan's Unexpected Exit Is a Warning Sign for Republicans

House Speaker Paul Ryan and White House chief of staff John Kelly made the obligatory small talk as they shared an elevator in a hotel in Austin in early April. They asked about each other’s families, groused about allergy season and complained that hotels are always too air-conditioned. But hanging in the air between them, Ryan told friends, was a mutual sympathy for their shared burden: President Donald J. Trump.

There wasn’t much to say, really, or much to be done. Both have found working with the President to be an infinitely frustrating task. Both had resigned themselves to trying to limit the damage.

Washington had long simmered with talk that Kelly had reached a breaking point and was on his way out, but as it happened, it was Ryan who exited first. On April 11, Ryan strode to the podium at the Capitol and declared that he would not seek an 11th term representing his hometown in a southern corner of Wisconsin. True to form, Ryan put the most optimistic spin he could on the situation. “You realize that you hold the office for just a small part of our history, so you better make the most of it. It’s fleeting, and that inspires you to do big things,” he said.

But Ryan’s departure marks a dangerous moment for his party. The 48-year-old Speaker was once the face of its future. Now his exit serves as a warning to House Republicans that they could well lose their majority in the fall elections. It sends a signal to conservatives that the real fight remains keeping control of the Senate. And it shows just how much the party is struggling in the Trump era.

Ryan’s time atop the House was never going to be easy; he didn’t even want the job in the first place. Drafted into service in 2015 by strategists who thought he could bridge the chasm between the party’s Establishment and activist wings in the wake of former Speaker John Boehner’s surprise retirement, he accepted on the condition that he could spend most weekends at home with his children. “You can’t take away my family,” Ryan said at the time. That proved more difficult than Ryan had anticipated, and he again cited family in his retirement announcement. “My kids aren’t getting any younger, and if I stay, they’re only going to know me as a weekend dad. And that’s just something I consciously can’t do,” he said at the Capitol.

Still, the speakership was an outlet for Ryan’s ideological ambitions. As Mitt Romney’s pick for Vice President in 2012, he never quite shook the bug for a presidential run of his own. He brushed off calls to join the race in 2016 but withheld his full-throated support for Trump’s candidacy in part because he had a 2020 run of his own in mind. When Trump warned of riots at the Republican convention if he wasn’t the nominee and attacked a judge’s Hispanic heritage, Ryan issued carefully worded criticism that showed his personal distaste for Trump, and also his future ambitions.

Yet when Republicans picked Trump, Ryan did his best to make it work. He asked his staff to serve as tutors to the incoming White House team, including a “Schoolhouse Rock”–style seminar on how a bill becomes a law. Unlike Senate majority leader Mitch McConnell, Ryan made an effort to foster a friendship with the President. Ryan loyalists found jobs throughout the West Wing and the Administration and, through them, Ryan kept tabs on what was coming from the other end of Pennsylvania Avenue. Although he often disagreed with the President, he eventually declared a policy of not commenting on the “tweets of the day.”

For every gain that came with sticking by Trump, however, there were setbacks. Last year’s once-in-a-generation tax-cut package was something of a life-long goal for Ryan. At the same time, there have been tremendous setbacks, such as the failure to repeal Obamacare as promised and near constant headaches from Trump’s inattention to the legislative agenda.

The Trump presidency had already taken a toll before it claimed Ryan. The Speaker is the 45th House Republican to announce he won’t seek re-election this year, and within a few hours another joined him. If Democrats net just 23 seats in the midterms — a fairly likely scenario — they will be able to thwart any further progress of the GOP agenda, provoke Trump and the Senate with their own bills and investigate the President’s dealings more aggressively.

Some former Speakers, such as Democratic Representative Nancy Pelosi, have stuck around after losing the majority to guide their parties in the wilderness. It’s not surprising that Ryan would not have the stomach for that. As he retires, however, he leaves a party that will soon descend into chaos. The right and centrist flanks could soon break into open hostilities. Two of his deputies, Kevin McCarthy and assassination-attempt survivor Steve Scalise, have been laying the groundwork to compete to succeed him for months. Ultra-conservative Mark Meadows and pragmatist Cathy McMorris Rodgers may also eye a run.

That doesn’t mean Ryan’s life in politics is over. In his retirement announcement, Ryan said he had ideas for the future of the GOP. “I have more thoughts on this,” he said, and “I’ll share those thoughts later.” Even as he exits the Trump elevator, it seems, Ryan is not done trying to steer his party’s future. 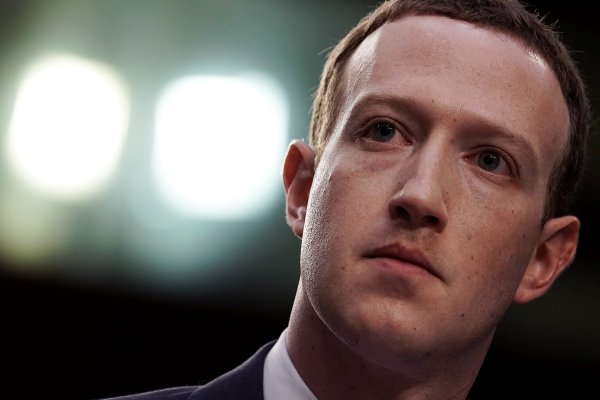 Mark Zuckerberg Says His Own Data Was Shared With Cambridge Analytica
Next Up: Editor's Pick