For many, meeting Beyoncé is a lifelong dream. For others, it’s a terrifying reality. That’s how it was for Cardi B, artist of the moment and current music superstar. (Her new debut album Invasion of Privacy came out last week, following up her summer 2017 hit “Bodak Yellow.”)

In a new interview with GQ, the outspoken Cardi B actually defined herself as “too shy” in her interactions with other celebrities. And as for Beyoncé? Doesn’t sound like she’ll be hanging out casually with Queen Bey any time soon.

“When I met Beyoncé, people be like, ‘How that felt? I bet you was mad happy,’ ” Cardi recalled in the interview. “It’s like, ‘Actually, I wanted to s–t on myself.’ It was a very scary thing. All she was doing was like, ‘Hi. I love your music.’ And I was like — UHHHN!” (The writer describes the noise Cardi made at this juncture as a “miserable, voice-cracking wail.”)

Cardi, who made further headlines recently with a Saturday Night Live performance and pregnancy announcement, is known for being a candid and larger-than-life personality. So it’s refreshing to hear that she, too, has her limits when it comes to her comfort with newfound stardom. After all, she’s just a “regular, degular, shmegular” girl from the Bronx who has found herself in the very center of the limelight. It may take some time for her to get adjusted to the Beyoncé appearances around her. But if the warm response to her album is any indication, she’ll have plenty of time to get settled in among her newfound A-list peers: everyone from Rihanna to Green Day to Oprah to Sam Smith has showed themselves to be a fan. 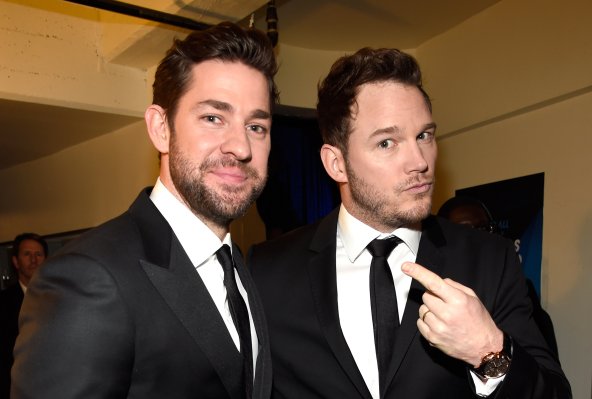 Chris Pratt, Ryan Reynolds and More Are Singing the Praises of John Krasinski's A Quiet Place
Next Up: Editor's Pick