Kate Middleton Welcomed a Baby Boy. These Are His Most Likely Names, According to Oddsmakers

By Kate Samuelson and Lena Grossman

Catherine, the Duchess of Cambridge, has given birth to her third child with Prince William— a baby boy, whose name has not yet been released by the royal family. Kate Middleton gave birth to the 8-pound, 7-ounce baby boy at 11.01 a.m. U.K. time (6.01 a.m. ET), according to Kensington Palace.

Arthur was a clear favorite (2/1) after Kate Middleton went into labor Monday morning, but another has emerged as another frontrunner: Alexander. British-based betting and gambling company Ladbrokes told TIME that as of 3:45 p.m. U.K. time, Alexander was at 4/1 odds and Arthur 6/4. James bumped down to 6/1 after previously being 4/1.

The newborn boy is a younger sibling to Prince George, 4, and two-year-old Princess Charlotte. A statement from the palace said that Prince William, the Duke of Cambridge, was present for the birth, and that the Duchess of Cambridge and her baby “are both doing well.”

George and Charlotte stopped by the hospital on Monday to visit their new baby brother. The formal announcement of the royal baby’s birth was placed outside Buckingham Palace, but the royal baby name has not yet been released.

When will they announce the royal baby name?

According to People, the royal baby name will be announced within a few days in order for Prince William and Kate Middleton to inform the Queen. It took two days for George and Charlotte’s names to be announced.

Royal babies tend to be named after their ancestors and relatives, and bookmakers’ odds are currently tipped in favor of the baby being named Arthur or James. Arthur, a classic British name, would pay homage to Queen Elizabeth’s late father King George VI, whose middle name was Arthur.

The new baby boy will be fifth in line to the throne after Prince Charles, Prince William, older brother Prince George and older sister Princess Charlotte. Prince Harry will become sixth in line and every one else in the line of succession will move one step away from the throne. 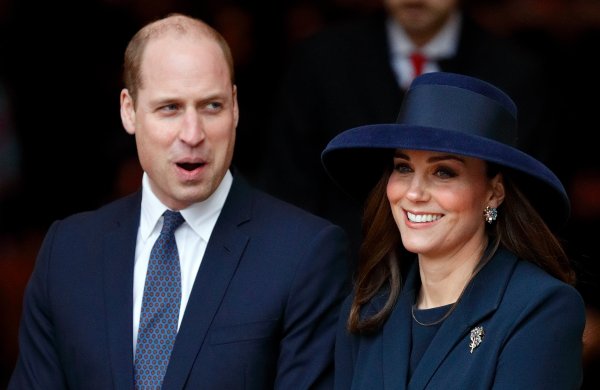 Here's How Kate Middleton and Prince William's Royal Baby Just Changed the Succession to the British Throne
Next Up: Editor's Pick