7 Tricks to Improve Your Memory

I used to have a memory that amazed people, but in the last few years I’ve had trouble remembering names and movie titles. (“You know, the one about the guy who goes somewhere? It won that award…”) I hope to have many years of sharp thinking ahead of me—I’m in my mid-40s, nowhere near senior-moments territory—so I got to wondering: Is there something I should be doing now to counteract the lapses that already seem to be taking place?

There’s no way around the fact that memory erodes as we get older. The hippocampus, the area of your brain responsible for building memory, loses 5 percent of its nerve cells with each passing decade. Plus, aging slows production of acetylcholine, a neurotransmitter vital to learning and memory. Based on these facts, scientists once believed that a person’s mental ability peaked early in adulthood, then went downhill from there. But over the last few decades, research has found that adults’ brains are still able to form new, memory-building neural networks in a process known as neuroplasticity. The reassuring latest thinking: With a little effort, anyone can boost their power of recollection.

To test this theory in the real world, I tried an array of research-backed brain-sharpening techniques over one six-week period. Am I now able to list all 44 U.S. presidents? No. But can I more easily summon up where I put my keys? Yes. And I think being able to leave my apartment and lock the door is a more valuable life skill than remembering James K. Polk. Here’s what worked for me—and what fell flat.

Health.com: 9 Foods that May Help Save Your Memory

Puzzles like Sudoku and crosswords may improve memory and delay brain decline, though experts are not yet sure why. “My guess is that playing them activates synapses in the whole brain, including the memory areas,” says Marcel Danesi, PhD, author of Extreme Brain Workout. Research so far is decidedly mixed: Some studies have found that, while doing crossword puzzles may make you better at remembering the capital of Burkina Faso, there’s little evidence they’ll boost your performance at more general tasks, like remembering where your car is parked. But a 2011 study showed that participants who played a computer game called Double Decision for six years improved their concentration so much that they had a 50 percent lower rate of car accidents.

So I decided to try an online brain-training program called Lumosity, which neuroscientists from Harvard, Stanford and the University of California at Berkeley have used in their own studies; its creators claim that 97 percent of users improve their memory in just 10 hours of playing time. First I answered a series of questions at lumosity.com to identify which of my cognitive processes, including memory, could use a little help. Then I received a personalized training regimen. A 10-minute daily series of games is free, and a more advanced program is available for $12.95 a month. (Being cheap, I stuck with the former.) The games are pure fun—remembering a pattern of blocks, spotting a bird in a field—and are based on what research has found to improve concentration and other cognitive skills.

My grade: B- By the end of a month, my “brain performance index” score rose 6 percent—not amazing in the Lumosity world, but respectable. The main problem: You have to play the games every day, forever, to keep up the benefits. I’ve mostly kept up. (Except on weekends. Or if I’ve had a busy week. OK, I haven’t kept up.)

According to Gary Small, MD, director of the UCLA Memory Clinic, memory superfoods include antioxidant-rich, colorful fruits and vegetables, which protect your brain from harmful free radicals. He’s also enthusiastic about low-glycemic carbs, like oatmeal, and anything with omega-3 fatty acids. In fact, a recent study published in Neurology found that people with low levels of omega-3s had brains that appeared to be a full two years older in MRI scans. That was incentive enough for me to follow the memory-enhancing diet from Dr. Small’s book The Memory Prescription, which claims it works in just two weeks. Much like the Mediterranean diet, it’s heavy on produce, legumes, nuts and fish. It’s low on meat, since meat’s omega-6 fatty acids may contribute to brain inflammation, a possible underlying mechanism for Alzheimer’s. Refined sugars produce a similar effect, so they were also out. (That was the toughest for me.) I ate a farmers market’s worth of blueberries, spinach, avocado and beets, and consumed enough fish to sprout gills. I also went beyond Dr. Small’s advice and took 2.4 micrograms of vitamin B12, the standard recommended daily amount—since studies show people with low levels perform poorly on memory tests—and 1,000 international units of vitamin D, discovered by Tufts University researchers to boost cognitive function. (My doctor signed off on the supplements.)

My grade: A It was difficult to eat meat only once a week, until I noticed how much less physically and mentally sluggish I felt. And my memory became markedly sharper over 14 days. (For instance, I quit using a bookmark because I could remember the page number I’d stopped on the night before.) Planning those meals took a lot of prep, but it paid off tremendously. I still try to use the diet as a guideline: I eat meat once a week, aim for five fruits and vegetables a day and pop omega-3 supplements (since I don’t get as much fish as I did on the diet).

“One reason people can’t remember where their keys are is they’re not paying attention when they put them down,” says Mark McDaniel, PhD, a psychology professor and memory researcher at Washington University in St. Louis. (His suggestion for always finding them: “When you put them down, stop and say out loud, ‘I’m leaving my keys on my dresser,'” or wherever you’re placing them.) Studies show that it takes eight seconds to fully commit a piece of information to memory, so concentrating on the task at hand is crucial. I willed myself to stop giving everything “continuous partial attention,” a term coined by tech honcho Linda Stone. I put away my gadgets when they weren’t absolutely needed. I didn’t have 10 websites up all at once. I called a friend, sat on my bed, closed my eyes and actually listened to what she was saying.

My grade: B+ It’s amazing how difficult it is to do one thing at a time. Concentration takes work, but I found I could remember appointments better because I paid attention when I made them and repeated the day and time, rather than agreeing to commitments while doing the laundry and returning e-mail messages. My husband, usually my living iCal, was very impressed.

A recent Swedish study found that adults who learned a new language showed improved memory for people’s names, among other things. Any activity that is practiced diligently, such as knitting or skiing, will likely have this effect, researchers say. I vowed to learn to play the keyboard. On YouTube I found PlayPianoKing, an affable guy who teaches everything from Pachelbel’s Canon to “Gangnam Style.”

My grade: C- While I did learn a mean “Gangnam” and felt my concentration improve, I soon gave up: With brain games and a diet overhaul crowding my schedule, the hour-long, every-other-day lesson was making me cranky, even before I saw any noticeable memory gains.

Researchers at the University of Pennsylvania have discovered that losing half a night’s rest—three or four hours—on just one evening can erode memory. And the journal Nature Neuroscience recently reported that one way to slow decline in aging adults is to improve the length and quality of sleep. During a deep sleep of eight hours or more, it’s believed that the brain shifts memories from temporary to longer-term storage. Yet according to the Centers for Disease Control and Prevention, one third of us get less than seven hours a night—including me.

So, for more than a month, I implemented a stringent schedule: I would put my preschooler to bed and take a bath. Then I’d hit my own bed with a book, rather than watch TV or movies, which several studies reveal will make you feel too keyed up to wind down. Normally I fall asleep at 11:30 p.m. and wake at 5:45 a.m., but the new routine put me out by 10.

My grade: A+ Nothing had a better effect on my memory than that long stretch of sleep. I was able to semi-credibly measure the difference because I started my other interventions a few weeks before this one. I bounded out of bed fully recharged. My mind became as focused as a laser beam; I even remembered every mom’s name during the school run (no more “Hey, you!” or just “Hi!”).

These are basically memory tools that give meaning and organization to a random group of words or concepts. They could be an acronym (BOG for “Buy oranges and grapes”), an exaggerated visualization (imagining a massive stethoscope to remember a doctor’s appointment) or a rhyme (to recall a co-worker’s name, I’d remember, “Ted has a giant forehead”). Memory champions also love chunking, or breaking a large amount of information into more manageable nuggets. Say you have to memorize these numbers: 2214457819. It’s much easier to do as a phone number: 221-445-7819.

My grade: A+ I found these tactics enormously helpful. I usually forget my poor nephew’s birthday, but this year I actually sent a gift, thanks to the unpleasant but memorable NITS (“Nephew is 10 Sunday”).

Researchers from the University of California at Irvine recently discovered that a little exercise might yield big mental benefits. They had one group of subjects ride stationary bikes for six minutes, while another group cooled their heels. Afterward, the active group performed significantly better on a memory test. Instant results! The researchers believe the boost may be tied to an exercise-induced brain chemical called norepinephrine, which has a strong influence on memory. And Dr. Small contends that exercise is the best memory aid of all. “It can increase your brain size,” he says—and the bigger your brain, the greater your capacity to remember. His recommendation: 20 minutes of brisk walking a day. I began doing an hour daily—more than Dr. Small recommends, but also more consistent than the gym workouts a few times a week I used to favor, and, according to many experts, more effective in juicing up memory.

My grade: A- This moderate, regular activity worked wonders on my stress levels, and it became much easier to concentrate afterward, so I could fix things (like a grocery list) into my memory. I grew addicted to my walks and still take them. In fact, I found that the memory-boosting healthy lifestyle habits—exercising more, stressing less, eating a better diet—were the most sustainable over time. And that’s a win-win. 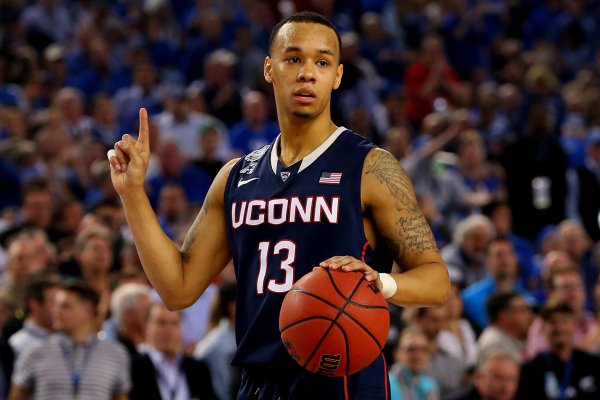 NCAA Final: Why Nail-Biters Bite
Next Up: Editor's Pick