John Bolton Is Trump's Newest Hawk. How Tough Will He Be?

After toiling in the Reagan Administration, John Bolton received a symbolic gift from his colleagues intended to sum up his tenure: a bronze-plated hand grenade. It became a prized possession that Bolton showcased on a coffee table in his Washington office for years afterward. Now the man who relishes his role as a bomb thrower will serve as President Donald Trump’s next National Security Adviser, further unsettling a world that both men appear to enjoy keeping off balance.

Bolton’s appointment on March 22 registered as the biggest lurch yet in the ongoing White House shake-up, not least for the contrast he offers with the departing H.R. McMaster, the three-star general who was viewed as a steadying influence on Trump. Starting on April 9, Bolton will coordinate U.S. strategy for some of the nation’s toughest diplomatic challenges. In May, Trump must decide whether to certify the multilateral deal signed during the Obama Administration under which Iran suspended its nuclear program. By that same month, the President is slated for a historic summit with North Korean leader Kim Jong Un to discuss the future of that regime’s nuclear arsenal.

In op-eds and television appearances, Bolton has been unequivocal in his opinion that both efforts are a waste of time. In fact, he’s made the public case to go to war with both nations, while excoriating their leadership. Fears abound in Washington that Trump is surrounding himself with people who will encourage the President’s most dangerous impulses. Bolton is an unabashed hawk, whose views largely align with newly nominated Secretary of State Mike Pompeo, who awaits congressional confirmation after the March 13 dismissal of Rex Tillerson.

It remains to be seen how Bolton, whose decades-long résumé is defined by a distaste for treaties and contempt for diplomatic niceties–despite serving three times as a diplomat–will mesh with Defense Secretary James Mattis, who like McMaster has been seen as a calming influence on Trump. Mattis, a retired Marine Corps general with firsthand experience of the human costs of war, emphasized the need for international alliances. He displayed his penchant for diplomacy in acknowledging that there may be issues on which he and Bolton disagree.

“I hope that there’s some different worldviews. That’s the normal thing you want, unless you want groupthink,” Mattis told reporters on March 27.

The Iran deal is one point of disagreement. Though no fan of Tehran, Mattis supports the pact, which bars Iran from enriching uranium until at least 2024. Bolton disapproves of the deal, which Trump has promised to decertify in May unless changes are made. “No fix will remedy the diplomatic Waterloo Mr. Obama negotiated,” Bolton wrote in the Wall Street Journal in January. “Mr. Trump correctly sees Mr. Obama’s deal as a massive strategic blunder.” In 2015, Bolton argued in the New York Times that “only military action” could thwart Iran’s nuclear ambitions. “A strike,” he wrote, “can still succeed.”

If the deal is dropped, Tehran will be free to sprint to create a weapon. Its regional archrival, Saudi Arabia, would respond in kind, its Crown Prince recently said, setting up an arms race in the world’s most volatile patch.

The question is whether Bolton, once in the West Wing, will prove as tough as he’s talked. “Taking hard-line stances in op-ed pages is all good and well, but reality begins to set in once you’re briefed on military plans,” says Anthony Cordesman, a former intelligence official at the Pentagon who now works at the Center for Strategic and International Studies.

Bolton, born in Baltimore and educated at Yale, has worked for every Republican President since Reagan, including a stint as U.S. ambassador to the U.N. under George W. Bush, whom he also served as a lawyer during the Florida recount following the 2000 election. In 2003, just as the so-called six-party talks to discuss dismantling Pyongyang’s nuclear-weapons program were set to begin, Bolton delivered a speech denouncing then North Korean leader Kim Jong Il as the “tyrannical dictator” of a country where “life is a hellish nightmare.” Pyongyang responded by calling Bolton “human scum” and a “bloodsucker.”

Bolton has continued to reiterate his aversion to diplomacy with North Korea. In January, he said that talking with the Hermit Kingdom was a “waste of time.” His most recent Journal op-ed was headlined, “The Legal Case for Striking North Korea First.” Eight days after it appeared, Trump accepted Kim’s invitation to meet in person. And 14 days after that, Bolton was named to the position Henry Kissinger first made a nexus of power and influence in the Executive Branch.

McMaster, who plans to retire from the military, will stay on to ensure a smooth transition. And it could well be smoother than widely expected. In an interview with Fox News, where he was a frequent commentator, Bolton said while he never has been shy about what his views are, that’s all behind him as he heads to the White House.

“Bolton is very hard-line, but he is smart and thoughtful–not impulsive,” says Michael O’Hanlon, a military analyst at the Brookings Institution. “I am worried, but there is some hope.” 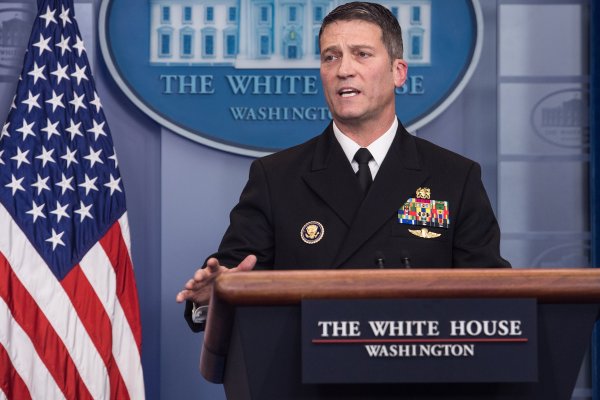 Adm. Ronny Jackson Is the Latest Military Leader Trump Has Tapped for a Top Job
Next Up: Editor's Pick