Daniels, whose real name is Stephanie Clifford, may be able to accomplish what millions of outraged women marching in pink hats could not — holding Donald Trump accountable for his behavior. If her lawyer Michael Avenatti succeeds with the motion he filed late on March 27 in Los Angeles, the President will have to testify under oath about the payment that Daniels received after signing a nondisclosure agreement to keep quiet about the consensual relationship she alleges that she and Trump had in 2006. The President has not spoken directly about the case, but has denied through his lawyer that the affair even happened. This legal maneuvering could expose the President and his lawyer to all kinds of campaign-finance-law questions about the $130,000 in “hush money” that Daniels received from the President’s attorney Michael Cohen just weeks before the 2016 election. The case could finally force Trump to tell the truth. Or it could get stuck in the courts for years.

Regardless of the legal outcome, Daniels has in many ways already won. In her 60 Minutes interview, she calmly, articulately dismantled Trump’s macho armor in a way that an army of feminists hasn’t been able to. Think of it: a President who turns even his relationships with world leaders into a virility contest about whose button is bigger had to watch a woman who has sex for a living tell 22 million viewers that she didn’t want to have sex with him.

Uncharacteristically, the man who has no problem attacking the Pope or the entire FBI hasn’t launched a counterstrike against Daniels or his other legal tormentors like former Playboy model Karen McDougal, who also appeared on 60 Minutes to talk about an alleged affair with Trump. McDougal is suing American Media, which she says deceived her when it bought the exclusive rights to her story, because its intention was to protect Trump, not help her career as promised. She, like Daniels, decided to tell all before the courts ruled. It’s a small but very visible revolt against the culture of forced arbitration and NDAs that shields men’s reputations by silencing women, not just in personal matters but in professions ranging from finance to politics. There is hope that the spotlight on these high-stakes NDAs will stoke a larger revolution in companies, and courthouses will curb the power of these agreements.

On Twitter, Daniels is anything but quiet. She not only discusses her case, but also promotes her subscription-only videos and battles sexist trolls with wit and a kind of fierce pride that a lot of women find inspiring. If someone calls her a whore, she says thank you. She has the world’s best comebacks to questions about her breasts. And she admonishes anyone who calls her a victim, because she says it diminishes real victims. Women praise her courage and find unexpected solidarity with her, and have tweeted things like, “Whether you’re an adult film star or a teacher or whatever, if you’re a woman, you’ll be called a whore one day.”

Then there’s the case of Summer Zervos, a former Apprentice contestant who filed a defamation suit against the President for calling her a liar when she accused him of sexual harassment. That case is moving slowly through the courts but may result in a parade of other accusers stepping up to give sworn testimony of their grievances for the record, finally getting their day in court.

It is a particular irony that these women whom Trump has tried so hard to silence present the most immediate peril to the success of his presidency — even as a fleet of FBI lawyers investigate his campaign. The Wall Street Journal editorial board put it this way: “The Stormy Daniels case is typical of Mr. Trump’s pre-presidential behavior in thinking he can, with enough threats and dissembling, get away with anything. He’s never understood that a President can’t behave that way, and this may be the cause of his downfall.”

The whole saga feels like a Greek myth in which the Fates — whom we’ll call Stormy, Summer and Karen — take on a rogue king who has thus far escaped him. 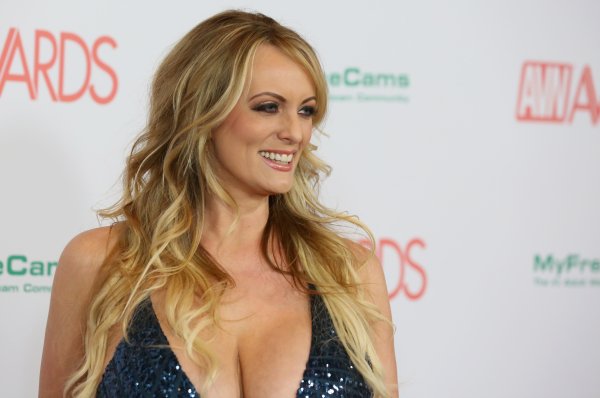 Stormy Daniels Is Borrowing From Donald Trump's Playbook
Next Up: Editor's Pick