For the Royal Wedding, Meghan Markle chose a polished low bun hair style to go with her Givenchy gown to marry Prince Harry, Duke of Sussex at St. George’s Chapel at Windsor Castle on Saturday, May 19, in what might be the biggest social event of the year.

The American actress, who was known for sporting a carefree chic, “messy” bun style during the time leading up to the Royal Wedding, swept her brunette locks into a sleek low chignon styled by Serge Normant, which she paired with a fresh-faced beauty look that consisted of strong brows, lush lashes, lightly-lined eyes, and rosy cheeks, as well as her signature nude lip, all of which was applied by Markle’s long-time friend and makeup artist, Daniel Martin.

Meghan Markle in St George's Chapel at Windsor Castle during her wedding to Prince Harry, May 19, 2018.
Jonathan —PA Wire

Prince Harry and Markle became engaged to Prince Harry in November 2017, after over a year of dating. See Meghan’s full wedding day look below. 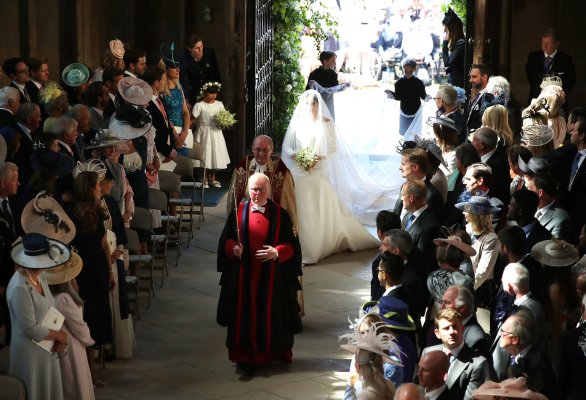 The Smiling Kid Behind Meghan Markle Is the Breakout Star of the Royal Wedding
Next Up: Editor's Pick