Prince Harry and Meghan Markle are managing to put their own modern spin on a royal wedding ceremony bound by British royal family rules.

Having said that, the pair’s relationship ahead of their big day on May 19 has been relatively by-the-book.

The couple are to be married at St. George’s Chapel in Windsor, the site of several royal marriages including Prince Harry’s father, Prince Charles, and the Duchess of Cornwall. Their invitations were produced by Barnard and Westwood, a company that has held the “Royal Warrant for Printing & Bookbinding by Appointment to Her Majesty The Queen” since 1985. Additionally, the Queen, officially gave her consent to the union, following royal protocol.

But it’s not all the old playbook. Here are four of the ways that their May 19 royal wedding will break from tradition:

1. Meghan Markle herself is a history-making royal bride

Harry and Meghan’s marriage is groundbreaking by its very nature, given that Meghan Markle is a mixed-race Catholic divorcée from the United States — not your average member of the traditional British royal family.

Until recently, Prince Harry would have been forbidden from marrying a Catholic under royal succession rules. Fortunately, these regulations were amended as part of a broader shift to remove bias and discrimination from the royal order.

2. The royal wedding cake is spring-themed and lemon flavored

It’s hardly controversial, but Prince Harry and Meghan Markle are also breaking the mold when it comes to their cake.

The pair are eschewing the towering fruit cakes traditionally favored by royal couples, including Prince William and Kate Middleton who went with fruitcake and sugar paste flowers for their wedding in 2011, and have instead picked a cake made by pastry chef Claire Ptak of London-based bakery Violet Cakes.

Their sweet dessert of choice is a lemon elderflower cake that will “incorporate the bright flavors of spring,” and is enrobed in buttercream and decorated with fresh flowers.

Here’s a look at a recent cake from the bakery.

3. Thousands of ordinary people are invited to the royal wedding

Kensington Palace announced in early March that the pair would be inviting 2,640 members of the public to Windsor Castle on their royal wedding day to watch Prince Harry and Meghan Markle’s arrival, as well as a carriage procession later in the day.

In a later tweet, the Palace explained that 1,200 people invited would come from “all corners of the U.K.” and “include young people who have shown strong leadership and those who have served their communities.” Two hundred of the other people invited to the royal wedding would be from charities and organizations close to Prince Harry and Meghan Markle.

4. Meghan Markle was a ‘Ms’ on her wedding invitation

It might not sound like a huge step, but the fact that Meghan Markle’s name was preceded by a ‘Ms’ as opposed to a “Miss’ on her wedding invitations was a significant break from tradition. In the past, royal brides-to-be have been referred to as ‘Miss’, including a ‘Miss Catherine Middleton’ prior to her 2011 wedding.

Traditionally, the honorific ‘Ms’ has referred to a woman who has been divorced, but today Ms. can be used to refer to a woman who doesn’t need to state whether they’re married or not with their title, in the same way that ‘Mr’ can apply to a man whether or not he’s been married. 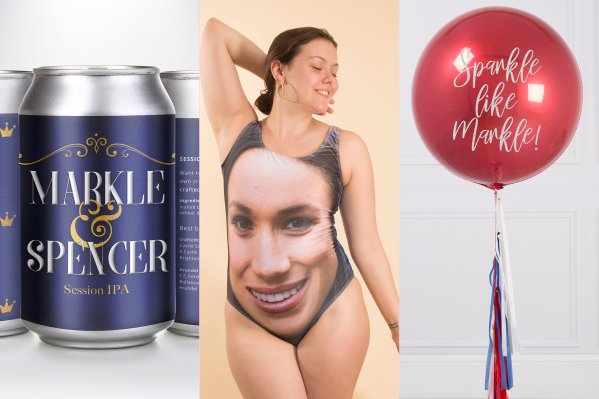 20 of the Tastiest, Fanciest and Most Bizarre Royal Wedding Souvenirs
Next Up: Editor's Pick