Daniels claims that she had a sexual relationship with a married Trump in 2006. She is currently suing Trump to break an agreement meant to prevent her from discussing their alleged affair, claiming that the document is invalid because Trump never signed it. Daniels has also said she will return the $130,000 paid to her by Cohen days before the presidential election, if she needs to.

Daniels’ lawyer, Michael Avenatti, tweeted that the motion was filed late Monday and is set to be heard on April 30. The motion also requests that a jury trial begin within 90 days of its hearing.

But David Schwartz, an attorney for Cohen, told NBC in a statement that the filing is a “reckless use of the legal system in order to continue to inflate Michael Avenatti’s deflated ego and keep himself relevant.”

Daniels also appeared on 60 Minutes to discuss her charges against the president, claiming during the interview that she and her child were threatened over the alleged affair in 2011, in an effort to keep her silence. 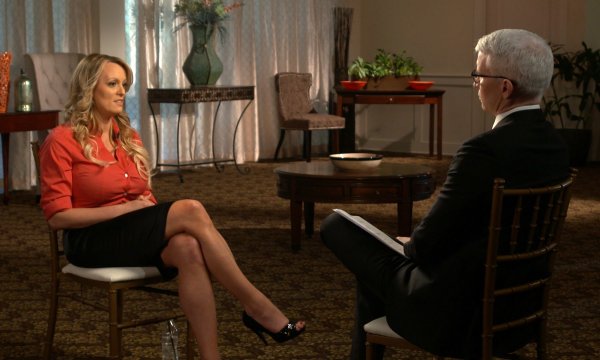 The Reality Show President Has Met His Match in Stormy Daniels
Next Up: Editor's Pick