No, Parkland Student Emma González Did Not Rip Up the U.S. Constitution

As hundreds of thousands of people joined the March for Our Lives on Saturday, a fake photo circulated online showing student leader Emma González tearing up the U.S. Constitution.

The fake image was shared on social media by far-right proponents of the Second Amendment. It was doctored from a Teen Vogue video, in which González tears up a shooting target, surrounded by other young activists.

González, one of the leaders of the #NeverAgain movement, helped organize the March for Our Lives and delivered a powerful speech on Saturday with a prolonged moment of silence to mark the time it took for a gunman to carry out last month’s shooting at Marjory Stoneman Douglas High School in Parkland, Florida.

Phillip Picardi, Teen Vogue’s chief content officer, set the record straight in a series of tweets about the doctored photo on Sunday, sharing a side-by-side comparison of the real image and the fake one.

“The fact that we even have to clarify this is proof of how democracy continues to be fractured by people who manipulate and fabricate the truth,” Picardi said on Twitter.

“It’s also among the most unfortunate parts of our work at @TeenVogue when we give young people a platform, we want to elevate their voices. Sometimes, that means subjecting them to hatred and vitriol,” he added. “The attacks being lobbied against Emma follow the all-too-familiar patterns: she’s an opinionated woman, she’s Latinx, she is queer. Some say those are strikes already against her when confronting the establishment.”

The Marjory Stoneman Douglas students who have become the most vocal gun control advocates have been targeted by social media vitriol and conspiracy theories before, some claiming they are paid “crisis actors.” But the students have denied and made fun of all of those claims, which are false.

“It just shows how weak the other side’s argument is, like they have to attack the messengers since the message is airtight,” González told BuzzFeed last month. “Also I’m thankful that there are people out there finding my doppelgänger for me, always wanted to have a party with a room full of people who look like me.” 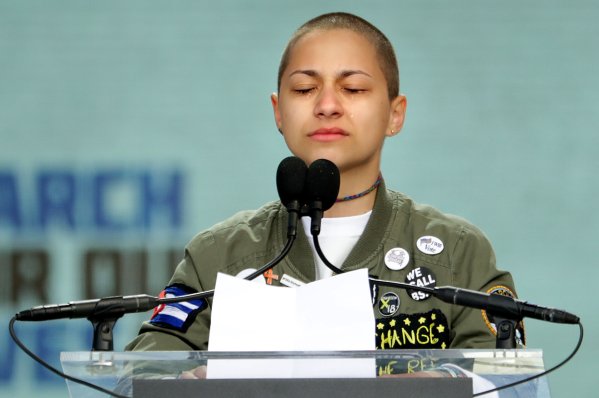 Emma González Kept America in Stunned Silence to Show How Quickly 17 People Died at Parkland
Next Up: Editor's Pick