Jared Kushner's Brother Was At the March For Our Lives in Washington, D.C.

Joshua Kushner is seen during March For Our Lives on March 24, 2018 in Washington, DC.
Noam Galai—WireImage
By Jamie Ducharme

At least one person with a connection to the White House — albeit a tenuous one — turned out to support the anti-gun-violence March For Our Lives on Saturday: Joshua Kushner, the younger brother of President Donald Trump’s son-in-law and adviser Jared Kushner.

Kushner, a venture capitalist and Oscar Health co-founder, took part in the Washington, D.C., march with his longtime girlfriend, model Karlie Kloss. Kushner posted a photo of Kloss, holding a sign that reads “Load minds not guns,” on Saturday. A separate post on his Instagram reads simply, “#IWillMarch.”

This isn’t Kushner’s first show of support for causes somewhat at odds with the White House. He reportedly donated $50,000 to the March For Our Lives earlier this month, and he was spotted at the Women’s March in January of last year. Kushner is also reportedly a lifelong Democrat who did not support Trump.

The White House, for its part, released a statement on Saturday praising protesters for exercising their First Amendment rights.

“We applaud the many courageous young Americans exercising their First Amendment rights today,” White House deputy press secretary Lindsay Walters said in a statement, according to the Hill. 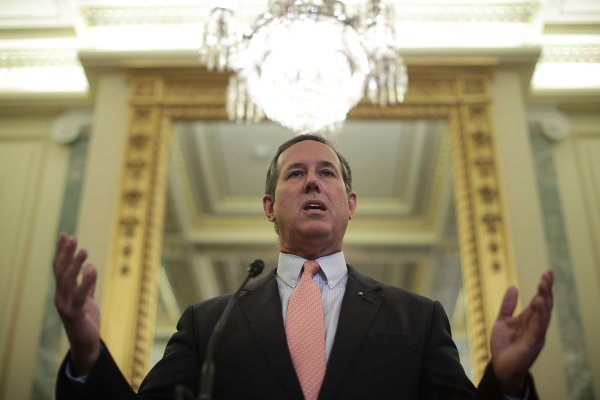 Former Sen. Rick Santorum Said Kids Should Be Learning CPR Instead of Protesting Gun Violence
Next Up: Editor's Pick