Mark Dombroski, a 19-year-old college student from Pennsylvania who had gone missing in Bermuda earlier this week, died from a fall, authorities said Thursday.

The cause of death announcement came from Dr. Christopher Milroy, a Canadian forensic pathologist who performed the autopsy on Dombroski, according to NBC Philadelphia.

“I found no evidence of foul play in my postmortem examination,” he said during a Thursday news conference.

Dombroski, a freshman at St. Joseph’s University in Philadelphia, had been in Bermuda for a rugby tournament over the weekend. When the competition finished on Saturday, Dombroski and his teammates went out to a local bar, according to the New York Times. But the next morning, the team was scheduled to leave Bermuda to return to the United States and Dombroski never showed up.

Dombroski’s parents quickly reported him missing, and after police, locals and Dombroski’s family searched for him, police on Monday found the 19-year-old’s body at the bottom of an empty moat near a colonial-era fort in Bermuda.

While Milroy said Thursday that Dombroski’s injuries were consistent with a fall from a high point, Bermuda police superintendent Sean Field-Lament said his department would continue investigating Dombroski’s death.

“We’ll do all our best efforts to get a clearer picture of what happened that morning,” Field-Lament said, according to NBC News. “There’s nothing to indicate that he was pushed at this stage.”

The police are working with the FBI to access Dombroski’s cell phone, Field-Lament said, and they are still looking to speak with witnesses about Dombroski’s death.

Most Popular on TIME
1
What the Freemasons Taught the World About Secrecy
2
Why the U.S. Is Losing the War On COVID-19
3
Dan Harmon Gives 'Full Account' of Sexually Harassing Community Writer Megan Ganz 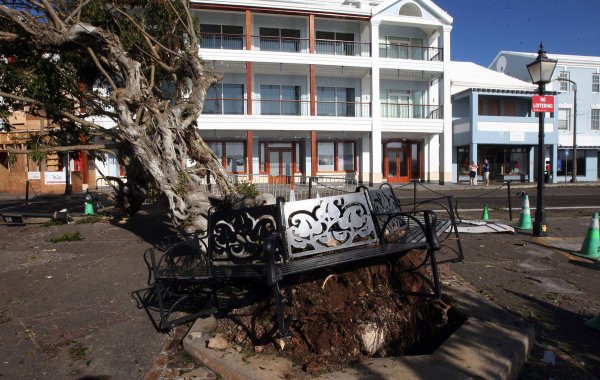