At 85, Ruth Bader Ginsburg might be the oldest sitting Supreme Court justice, but that doesn’t mean that she can’t hold her own when it comes to pumping iron, something that late night funnyman Stephen Colbert discovered when he joined RBG for her famed workout routine.

In a segment for The Late Show with Stephen Colbert, Colbert joined the justice and feminist hero for a series of stretches, cardio, weight-lifting, and exercise that included doing planks and push-ups (Ginsburg is notorious for reportedly being able to do 20 of them, which she demonstrated in the clip) and not surprisingly, Ginsburg basically schooled Colbert when it came to working out.

While the pair exercised, Colbert took time to talk to Ginsburg about the most pressing issues — provided that they weren’t about any pending Supreme Court cases. He found that Ginsburg, whose nickname “The Notorious RBG” is an homage to the Notorious B.I.G., had something very much in common with the late rapper.

“We have one thing, clear, in common, and that is we were both born and bred in Brooklyn, New York.”

Ginsburg also answered a question that has long stumped pop culture: Is a hot dog a sandwich?

Ginsburg’s ruling? If we consider a sandwich as something between two pieces of bread a sandwich but classify a roll that’s not fully halved as suitable sandwich material for things like subs, then a hot dog could certainly be considered a sandwich. 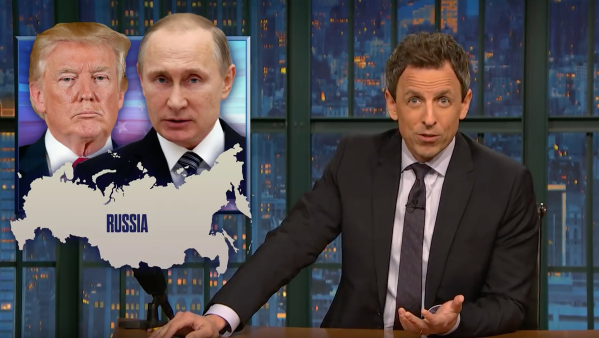 Seth Meyers Torches Trump Over 'Do Not Congratulate' Debacle
Next Up: Editor's Pick