Jan Stromme—Getty Images
Ideas
By James Sexton
James J. Sexton, Esq., is a divorce lawyer and author of the forthcoming If You're In My Office, It's Already Too Late: A Divorce Lawyer's Guide to Staying Together.

From time to time, in moments of transient loneliness, do you long for some temporary distraction or brief mental escape from your day-to-day life? Do you ever think about people you slept with when you were single, or people you wanted to sleep with? Wonder what they’re doing now? Would you like to peek in, perhaps even anonymously, on what those people are doing?

Don’t kid yourself. You’re an idiot if you use Facebook. If you’re vaguely unhappy with your relationship or marriage, and especially if you’re more than vaguely unhappy with it: Stay away from Facebook. The vast majority of what you’ll find there is unhappiness masked as happiness. It will f-ck with your head, your heart, and your relationship. If I had a dollar for every divorce caused by infidelity that started on Facebook, I would have… well, just about the same amount of money I have. (Bless you, Mark Zuckerberg.)

Facebook is foreplay. Facebook facilitates adultery and infidelity generally. Facebook gives you the means, the excuse and the cover to communicate with people you have no reason, no business, to talk to. Their day-to-day life has nothing to do with yours — not anymore, anyway. In many cases, perhaps the majority of cases, you follow and chat with this individual because you remember him or her fondly, as he or she might remember you; the memories are from a simpler time in your lives, when you were in college, or high school, when maybe you had a lot more sex, and when nervous possibility was in the air. (You’re probably remembering it with more fondness than it merits.) Your life was about going to class, and smoking weed, and working a crappy part-time job with no real responsibilities so that you’d have enough money to afford frivolous, enjoyable garbage.

Look at enough bullshit highly curated vacation photos on Facebook and you’re bound to find the truth of your life gradually, then suddenly, more depressing than it probably is.

I am confronted by infidelity every day of my work life. I have heard about so many mountains and oceans of it that I even came up with an infidelity taxonomy (see Chapter 14 of my book If You’re In My Office, It’s Already Too Late.) In my own practice, and I would wager in the practice of almost every other divorce attorney in the era of social media, infidelity that begins online, usually through Facebook, is the single most common seed for the mighty oak that eventually becomes a full-blown affair.

Oh, and in case you’re interested: Every status you post on Facebook may be used against you in a court of law. In addition to those terms of service that everybody agrees to and nobody reads (not even lawyers), there should be some Facebook Miranda rights that are read to you when you sign up:

I was going to write a sentence or two here about how it isn’t my intention to single out Facebook among the numerous social media platforms, but let’s be honest: Facebook is in a class by itself. Instagram has some of the same features (and the beautiful filters make your life look even better!) but not so much of the business stuff that gives the plausible deniability needed for efficient infidelity. Married people aren’t really using Snapchat for that reason. You can’t really claim you’re using Snapchat to “check what time the tire store opens this weekend” or “read reviews of the new dim sum place down the street.”

There’s a popular saying in Alcoholics Anonymous, meant to discourage people in recovery from hanging around bars: “If you sit in a barbershop long enough, eventually you’re going to get a haircut.”

Quit Facebook. You don’t need the temptation and you don’t need to create the temptation for someone else. Let the past be the past. Don’t put the future in jeopardy just to indulge in some frivolous nostalgia. The negatives far outweigh the positives. I quit Facebook a year ago, and when people ask me why, I tell them candidly: I don’t want to look in people’s windows anymore to see what they’re doing. Even if they want me to. Especially if they want me to.

Don’t waste your life crafting an advertisement for how great your life is. Get out there and live a great life. 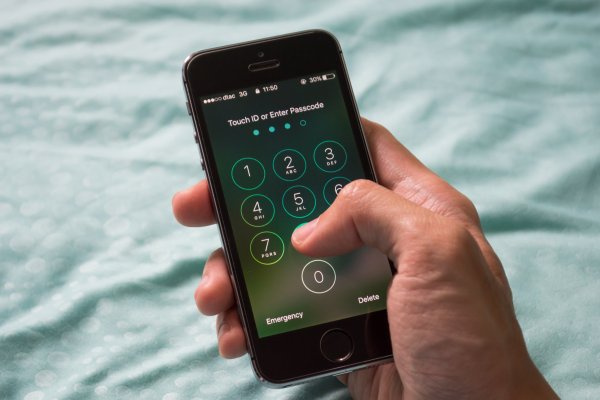 Toddler Accidentally Locks iPhone for Nearly Half a Century
Next Up: Editor's Pick