Russia Will Interfere in the 2018 Elections. Those Fighting It Say We're Not Ready

Several parts of the federal government are moving to fight near-certain attempts to interfere in the 2018 midterm elections. But even those charged with the task say their efforts may not be enough.

“We have seen Russian activities and intentions to have an impact on the next election cycle,” CIA Director Mike Pompeo, who President Trump recently selected as his newest Secretary of State, told Congress last month.

The Senate intelligence committee, a loose group of other senators and the Federal Election Commission have made recommendations to improve upon systems they say faltered in the 2016 presidential election. But none have the power to ensure these proposals actually translate into law, and officials are urging quick action.

“This issue is urgent – if we start to fix these problems tomorrow, we still might not be in time to have systems in place by 2020,” Republican Sen. Richard Burr, Chairman of the Senate Intelligence Committee, said at a Senate hearing on election security on Wednesday.

Here’s a look at these proposals and how they could come up short before the midterm elections.

The Senate Intelligence Committee released its preliminary recommendations Tuesday to beef up election security for 2018. Committee members said their findings revealed Russia had attempted to infiltrate voting systems in at least 21 states and had accessed at least one database, although they said there is no evidence there was influence over votes.

The committee’s recommendations include implementing stronger channels of communication between federal, state and local election officials, increasing cybersecurity measures on election systems – like two-factor authentication when logging into a voting system – and using voting machines that not only lack wi-fi, but have some form of a paper trail.

Although the committee is holding a hearing on Wednesday — in the midst of a heavy snowstorm — to discuss these recommendations, the members acknowledged proposals can only go so far and urged swift legislative action.

Committee members also seemed to acknowledge that the clock was ticking to actually turn these proposals into concrete legislation: the midterm elections are less than eight months away, and primaries are already underway.

“We are already in an election year,” said Republican Sen. Susan Collins, who sits on the committee. “The need to act now is urgent.”

The recommendations from the Senate Intelligence Committee come on the heels of the the Federal Election Commission approving a a draft notice of a proposed rule, which contains two proposals that would regulate some online political ads.

The proposed rule changes came in response from the revelations that the Russians had ran political ads on major technology sites like Facebook, Twitter and Google. The proposed rules clarify that disclaimer rules apply to online advertisements that advocate for or against a candidate.

There will now be a 60-day period where the FEC can receive comments on the proposals and a public hearing is set for June 27. But the FEC still has to write the rule that will be implemented, which is not guaranteed. The commission is supposed to have six members, but is currently operating with four: two Republicans, one Democratic and one independent commissioner, who caucuses with the Democrats.

For anything to move forward, they all have to agree, which will likely require compromise. And even if that were all to happen this summer at the earliest, a majority of the primary elections already would have happened. And even the commissioners acknowledge that the rule is just a tiny step.

“This was the most I can get an agreement to do and it was a heavy lift,” Ellen Weintraub, Vice Chairwoman of the Federal Election Commission, said in an interview with TIME. “I wish we could take it further. I wish it could be broader. But this is all we can do in the short term.”

But Adav Noti, Senior Director of Trial Litigation at the Campaign Legal Center, and an associate counsel for the FEC from 2013 to 2017, said agreeing on a rule change, no matter how small, is still an improvement.

“If they’re able to reach agreement on an actual proposed rule-making that would be a step forward, even if it’s incremental,” he said.

Both Weintraub and Noti also stressed the FEC cannot fix all issues of online ad disclosure. And there is a proposal in Congress, the Honest Ads act, which would fix a lot of what the FEC doesn’t address.

Sponsored by Democratic Sens. Mark Warner and Amy Klobuchar and Republican Senator John McCain, the act requires online political advertisements adhere to the same standards for ads on television and radio. The act also mandates that major online platforms keep public repositories of ads from any person or group who spends at least $500, which would make the ads easier to track.

The act has been endorsed by over 25 experts and oversight groups; the Campaign Legal Center said in its January report, “Examining Foreign Interference in U.S. Elections,” that the act was essential to impeding holes the Russians took advantage of in 2016.

But the act was introduced in October – and Congress has not scheduled any hearings or votes on this bill in the subsequent five months.

In December, a bi-partisan group of Senators introduced another act, the Secure Elections Act, which is designed to prevent cybersecurity threats to election systems. But that act has not been taken up for a vote either. 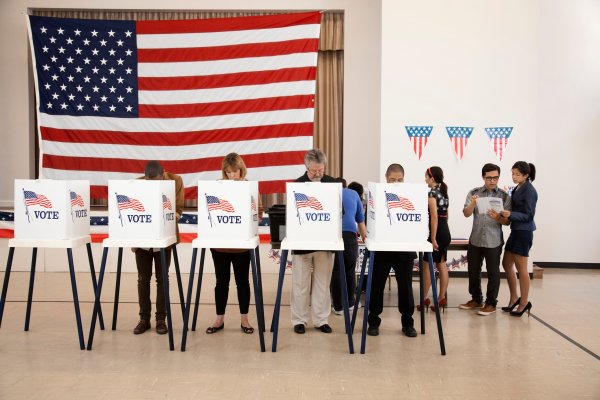 Should You Get Election Day Off? These Companies Say Yes
Next Up: Editor's Pick