A Spring Nor’easter Dumped More Than a Foot of Snow on the East Coast. Here’s the Latest on Winter Storm Toby

Winter Storm Toby, the fourth Nor’easter in less than three weeks, covered the storm-ravaged East Coast with a fresh blanket of snow just in time for the start of spring.

Long Island bore the brunt of the storm, as people in Bay Shore and Patchogue woke up to more than 19 inches of snow on Thursday, the Associated Press reports. At least one traffic death was reported in Long Island, and another was reported in New Jersey.

The storm lost some energy early Thursday morning as it hit New England, potentially sparing areas like Boston from the worst before dying down in the afternoon.

Though not quite as powerful as the previous Nor’easters this year, the so-called “four’easter” still brought more than a foot of snow to parts of Pennsylvania, while Central Park in New York City recorded about 8 inches.

Airlines once again took a proactive approach to the bad weather — cancelling more than 4,000 flights and waiving change fees due to Winter Storm Toby. American Airlines suspended service at New York City’s John F. Kennedy and LaGuardia airports until Thursday. By Thursday, most airlines were rolling back into service. Amtrak, which reduced service between Washington and Boston on Wednesday, was running a modified schedule on Thursday.

Here’s what you need to know about when Winter Storm Toby will hit and how much snow is expected from the Nor’easter:

Winter storm warnings for Storm Toby were issued for a broad swath of the East Coast ranging from eastern Massachusetts to the Smoky Mountains of Tennessee and North Carolina; (that area includes the cities of Boston, Providence, Hartford, New York City, the Tri-State area and Philadelphia.)

Winter storm warnings are upgrades from winter storm “watches,” which have been issued in Washington D.C. and Baltimore metro areas.

There are three types of winter warnings issued by the National Weather Service: watches, warnings and advisories. Warnings and advisories are both upgrades in severity from the initial “watch.” A “warning” is the most severe of the three, indicating expected heavy snow of 6 inches in 12 hours or 8 inches in 24 hours, and blizzard conditions for “at least three hours,” according to the NWS’s website. An advisory indicates between 3 to 5 inches of snow within 12 hours.

Winter weather advisories have currently been issued from parts of Indiana and Kentucky to western Pennsylvania and West Virginia, according to The Weather Channel.

The National Weather Service New York predicted Winter Storm Toby would take effect after from 6 a.m. Wednesday, with the potential for up to 18 inches of snow in some areas across the Tri-State region. Strong winds and “heavy wet snow,” hit the area, according to the NWS New York Twitter account.

How will Winter Storm Toby affect the South?

Tornado watches were issued for much of Florida and parts of Georgia in the wake of Winter Storm Toby, as those areas receive hail and violent winds.

Are schools closed because of the weather?

Yes, a number of schools in districts across the East Coast closed because of Winter Storm Toby. Public schools in Washington, D.C., Baltimore, Philadelphia and New York City closed Wednesday. Schools in Boston are open, but after-school activities were cancelled. Many schools across the region reopened Thursday with delays. Several school districts in Long Island, parts of which saw more than a foot of snow, are operating on a two-hour delay. 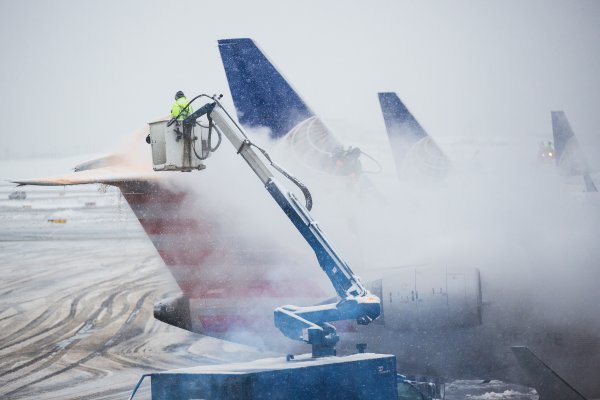 More Than 4,000 Flights Are Cancelled Due to Winter Storm Toby. Here’s What Affected Travelers Need to Know
Next Up: Editor's Pick