Jim Carrey recently painted a picture that bears a jarring resemblance to White House Press Secretary Sarah Huckabee Sanders, and the Internet is both hailing and criticizing the actor.

Carrey tweeted a picture of his art with the caption, “This is a painting of a so-called Christian whose only purpose in life is to lie for the wicked. Monstrous!”

The painting may take a dig at Sanders, but the tweet itself seems to mimic President Donald Trump’s own social media usage and phrasing, who often uses exclamation points after one or two-word phrases, such as “disgraceful!” or “witch hunt!”

Many reactions on Twitter denounced Carrey’s portrait, calling him “sexist” and a “bully.” Former governor of Arkansas and presidential candidate Mike Huckabee — and Sanders’ father — tweeted that Carrey is a “Pathetic BULLY, sexist, hater, bigot & ‘Christaphobe.'”

But there were some people who did not completely disagree with Carrey’s art. One Twitter user called Carrey’s painting “interpretive art work.”

According to the Daily Beast, Carrey began painting about six years ago to “heal a broken heart,” but his artwork became increasingly more political in November. Much of Carrey’s work now revolves around political satire, including portraits of Rick Gates, who pleaded guilty in February in Robert Mueller’s investigation, and Sen. Marco Rubio.

A spokeswoman confirmed to Associated Press that the painting is Carrey’s, but would not confirm it was of Sanders. 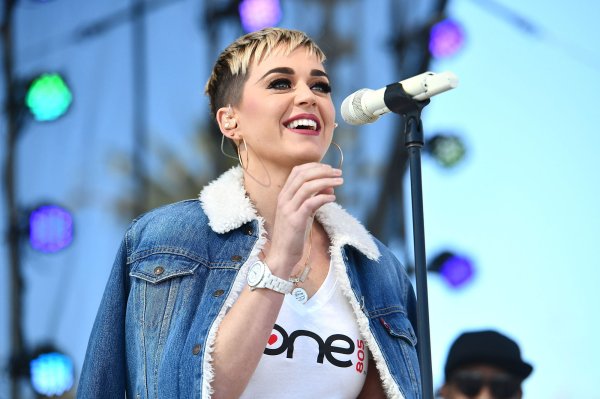 Here's How Katy Perry Responded to a Taylor Swift Superfan on American Idol
Next Up: Editor's Pick