Ideas
By John Preskill
Preskill is the Richard P. Feynman Professor of Theoretical Physics at the California Institute of Technology.

I’m glad to write about Stephen Hawking for Time because Stephen spent much of his scientific career thinking and writing about time. Time was his thing.

Stephen studied time from the perspective of Einstein’s theory of gravitation, the general theory of relativity. One of his early achievements was proving that time had a beginning — that the laws of physics as we now understand them must have broken down very early in the history of the universe, at the Big Bang. Stephen also greatly advanced our understanding of black holes, where gravitational forces are so strong that time comes to an end. He argued forcefully that travel backward in time is disallowed by the laws of physics, which (as he put it) “makes the world safe for historians.” No one understood time better than Stephen Hawking.

Stephen’s greatest scientific achievement was a discovery about black holes in 1974 that shook the world of physics. According to Einstein’s theory, nothing — including light — can escape from inside a black hole. That’s why it’s black. But Stephen found that black holes are not really completely black. Instead, due to the subtle consequences of quantum physics, they emit what we now call Hawking radiation. That insight ignited a controversy that still rages 44 years later, regarding what happens to information that falls into a black hole. If I drop my highly confidential diary into a black hole, will it be lost forever from the universe? Or will it emerge from the black hole hidden in the Hawking radiation, highly scrambled but decipherable in principle? We still don’t know the answer for sure, but Hawking’s breakthrough laid the foundation for much of the progress we’ve made on the greatest challenge facing fundamental physics: understanding how gravitational physics and quantum physics fit together.

While his scientific accomplishments alone would suffice to ensure an enduring legacy, Stephen Hawking also became one of the world’s most successful popularizers of science. Stephen firmly believed that the quest for a complete theory of the universe should be accessible to everyone, at least in broad principle, not just to a few specialists. That conviction drove him to write A Brief History of Time. While other scientists write books for lay readers, only Stephen seemed to earn tenure on the New York Times bestseller list, thanks in part to that ingenious title. The book sold over 10 million copies and was translated into dozens of languages. Its extraordinary success led to more books, including a series for children Stephen co-authored with his daughter Lucy.

And I haven’t even mentioned yet what made Stephen Hawking the most famous scientist in the world — he achieved scientific greatness despite a severe physical disability, all while displaying a zest for life and buoyant sense of humor that seemed miraculous under the circumstances. People rooted for Stephen, and he appreciated having millions of fans.

Stephen was fun to be with. I sensed when we first met that he would enjoy being treated irreverently. So in the middle of a scientific discussion I could interject, “And what makes you so sure of that, Mr. Know-It-All?” After a beat Stephen would respond with a glint in his eye: “Wanna bet?”

With our friend Kip Thorne, we made some of those bets “official,” and we were all taken aback by how much attention they received. Stephen conceded our most famous bet (regarding whether black holes destroy information) in 2004, before an audience in Dublin of 700 scientists and at least 50 reporters from print and electronic media. To pay off, he presented me with Total Baseball: The Ultimate Baseball Encyclopedia. You can’t buy one of those in Ireland, so Stephen’s assistant had arranged to have it shipped overnight just in time. Not knowing what else to do, I held the book over my head as though I had just won the Wimbledon final, while a million flashbulbs were popping (it seemed like a million, anyway). One of those pictures wound up in Time.

We made bets for fun, but the scientific issues in question, founded on some of Stephen’s most far-reaching contributions, are ones many physicists passionately care about. Combining extraordinary depth of thought with an irrepressible sense of play, that’s what I’ll remember best about Stephen Hawking. 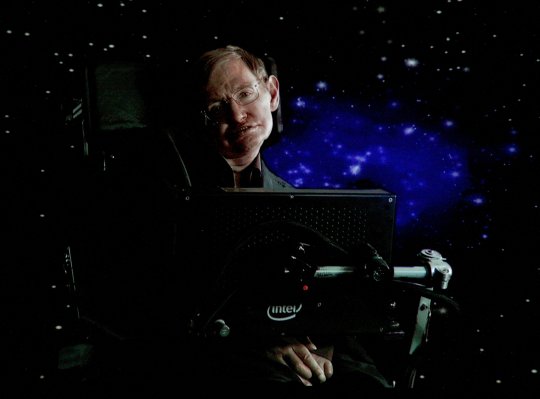 Stephen Hawking's Legacy Spans the Universe — Both Within and Beyond Us
Next Up: Editor's Pick