Who Is Mike Pompeo? What to Know About the Next Secretary of State

After months of tension, President Donald Trump on Tuesday fired Secretary of State Rex Tillerson on Tuesday, announcing he would nominate CIA Director Mike Pompeo to replace him.

Trump was quick to praise his new pick for the cabinet position, writing on Twitter that Pompeo “will do a fantastic job!” Other top Republicans added their seal of approval as well.

“He understands very clearly the international challenges and the opportunities before America in the 21st Century,” Sen. Marco Rubio tweeted. “No one understands the threat posed by North Korea & Iran better than he does,” Sen. Lindsey Graham added.

Here’s what you need to know about Trump’s new choice for Secretary of State.

Who is Mike Pompeo?

The departing CIA director got his political start in the House of Representatives, where he served three terms as a Kansas Republican.

Prior to his entry into politics, Pompeo grew up in Orange County, California, and attended the United States Military Academy at West Point until 1986. After graduating first in his class with a specialization in mechanical engineering, he served as a cavalry officer in the Army until 1991. Pompeo then concluded his military career and set off for Harvard Law School, where he took up the position as editor of the Harvard Law Review before graduating in 1994.

Pompeo’s political views have been described as aggressive. He campaigned for Congress as a Tea Party Republican and took hardline stances on Iran (he considers it a national security threat), Guantanamo Bay prison (he believes it should remain open), the use of torture (he defends it), and Hillary Clinton’s involvement with the 2012 Benghazi attack (he harshly condemned her).

Does Mike Pompeo need to be confirmed by the Senate?

Yes, Pompeo will once again need to be confirmed by the Senate for his new role as Secretary of State. The hearing will be headed by Tennessee Sen. Bob Corker, a Republican who has clashed with Trump in the past.

“I had a very good conversation with Director Pompeo this morning and look forward to meeting with him soon,” Corker said in a statement Tuesday. “As I shared with the president, the committee will consider his nomination as expeditiously as possible.”

The Senate Foreign Relations Committee is set to hold the confirmation hearing in April. Pompeo was confirmed for his role as CIA director by a vote of 66 to 32.

What has Mike Pompeo said about Russia?

Pompeo believes strongly Russia is a potential national security threat. Speaking at a foreign policy panel in Washington in October 2015, the then-Congressman said that Russian President Vladimir Putin is “heck bent on changing the geopolitical future,” and said that President Barack Obama was not being tough enough on the country.

In January, Pompeo told the BBC that he was confident that Russia would attempt to meddle in the upcoming midterm elections.

“Of course. I have every expectation that they will continue to try and do that, but I’m confident that America will be able to have a free and fair election [and] that we will push back in a way that is sufficiently robust that the impact they have on our election won’t be great,” he told the outlet.

Who would take over for Mike Pompeo at the CIA?

Gina Haspel, deputy director of the CIA, is in line to to fill Pompeo’s position. Trump confirmed the nomination in a tweet and noted that she would be “the first woman so chosen” to run the agency.

Hapsel has faced backlash for overseeing the torture of terrorism suspects while at the CIA and the destruction of videotaped evidence of the incidents. She will also need to face the Senate in order to be confirmed for the new position. 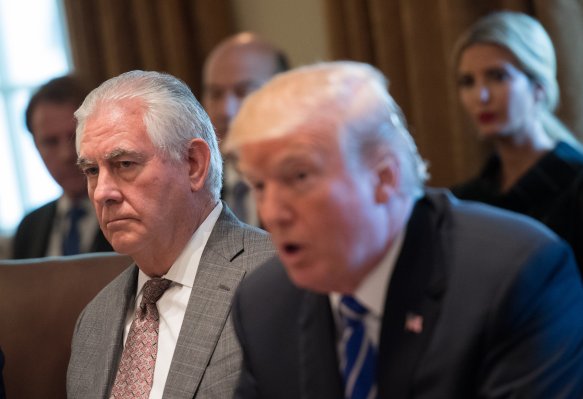 The Rise and Fall of Rex Tillerson: A Timeline
Next Up: Editor's Pick