Catherine, Duchess of Cambridge, gave birth to a baby boy, her third royal baby with Prince William, at the Lindo Wing of St. Mary’s Hospital in London on Monday. The newborn joins Prince George and Princess Charlotte in the growing royal family for Kate Middleton and Prince William.

Middleton was admitted to the Lindo Wing early Monday morning. And soon enough, the reunited family will make their exit from St. Mary’s Hospital’s Lindo Wing in London’s Paddington neighborhood, which is also where Middleton gave birth to both Prince George and Princess Charlotte. With Prince George, Middleton spent about a day at the hospital before heading for home; for Princess Charlotte, she appeared for a photo with her newborn fewer than ten hours after giving birth.

For live coverage of the royal baby, the Kensington Palace Twitter is worth following along as they introduce their new child to the world.

Prince William, Middleton and the three children will most likely next be appearing in public in an official capacity at the upcoming nuptials of Prince Harry and actress Meghan Markle. That royal wedding is scheduled to take place on May 19 in Windsor, England, not too far outside of London. 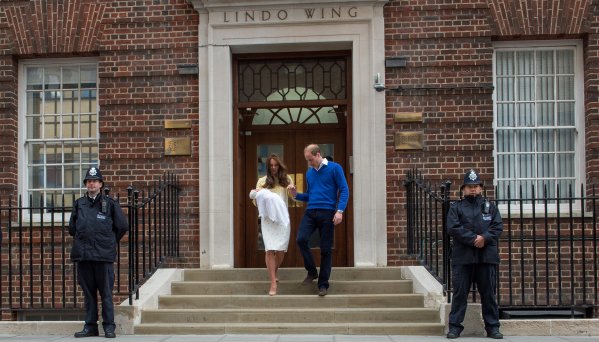