'They Love Their Guns More Than Our Children.' Eminem Calls Out NRA in His iHeartRadio Performance

Rapper Eminem called out the NRA in his iHeartRadio performance on Sunday night, adding a blistering new freestyle verse to his song “Nowhere Fast,” where he attacked gun owners for “loving their guns more than our children.”

The sobering performance was introduced by Alex Moscou, a survivor of the fatal school shooting in Parkland, Florida where 17 students died. Moscou said that he and other Parkland survivors were “tired of hearing politicians sending their thoughts and prayers to us, and doing nothing to make the necessary changes to prevent this tragedy from happening again.”

When Eminem took the stage, he reiterated the call, pointing to the funding that the NRA has provided for politicians in the past: “This whole country is going nuts, and the NRA is in our way/They’re responsible for this whole production/They hold the strings, they control the puppet/And they threaten to take donor bucks/So they know the government won’t do nothing and no one’s budging/Gun owners clutching their loaded weapons/They love their guns more than our children.”

Eminem’s call for gun control and policy reform follows other politically charged performances that the rapper has recently given; in the past year, Eminem has been vocal about his displeasure with Donald Trump and his administration in the White House.

Watch the performance below. 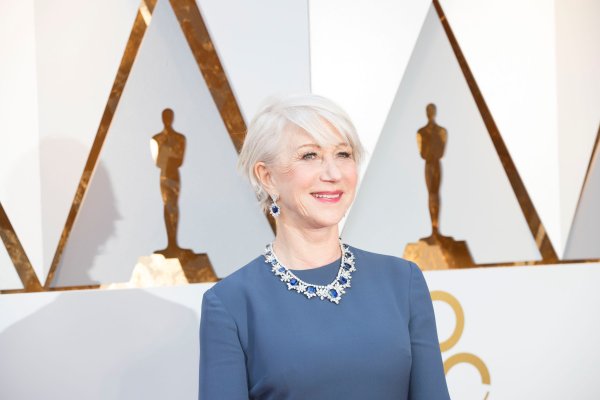 Helen Mirren Has No Qualms About Sharing Pre-Oscars Selfie
Next Up: Editor's Pick