Newly released court documents show that a federal judge reprimanded Paul Manafort for breaking a gag order she had imposed on his case.

At a court appearance in Washington, D.C. on February 28, Judge Amy Berman Jackson chastised President Trump’s former campaign chairman, saying, “I want to reiterate, Mr. Manafort, that the order that I issued, over no one’s objection, does not just apply to Mr. Downing [Manafort’s lawyer], but it applies to you, and issuing a statement about the prosecution, I believe, is contrary to the order,” according to an official court transcript.

Jackson referenced a statement issued on behalf of Manafort on the day that his former business associate and co-defendant Rick Gates pleaded guilty in his own case. She didn’t specify what the statement said, but it appears to be the one Manafort released on Feb. 23, which read, “Notwithstanding that Rick Gates pled today, I continue to maintain my innocence.”

“I had hoped and expected my business colleague would have had the strength to continue the battle to prove our innocence,” Manafort’s statement continued. “For reasons yet to surface he chose to do otherwise. This does not alter my commitment to defend myself against the untrue piled up charges contained in the indictments against me.”

Gates pleaded guilty in February to conspiracy against the United States and making a false statement. Manafort, who was indicted in special counsel Robert Mueller’s investigation, has pleaded not guilty in D.C. district court to conspiracy against the United States, conspiracy to launder money and making false statements, among other charges. He is also facing a second case in federal court in Virginia, where he pleaded not guilty to tax and fraud charges.

Jackson issued the gag order in November, saying that Manafort and others involved in the case had to “refrain from making statements to the media or in public settings” to avoid tainting a jury with pretrial publicity.

Jackson said she wouldn’t punish Manafort for his Feb. 23 statement. “I recognize that on that date there were hundreds of articles indicating that your business partner pled guilty to conspiring with you,” she said. “I can certainly understand the impulse to not let that go by without asserting your innocence. So with respect to the statement that was issued that day, I’m not going to take any action.”

But she warned him not to do it again. Manafort’s trial in D.C. will begin on September 17. 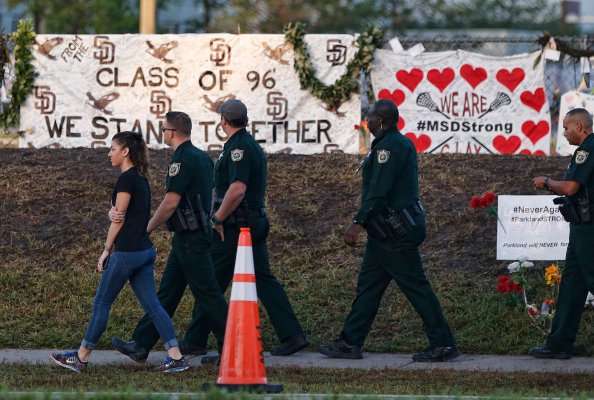 756 Copycat Threats Against Schools Since Parkland
Next Up: Editor's Pick