How Oat Milk Could Change the Way You Drink Coffee

Along with self-driving cars and a manned trip to Mars, one of modern society’s most pressing technological challenges has been developing tasty nondairy alternatives to milk. In the race to fill the nation’s cereal bowls and coffee mugs, almond milk has recently reigned supreme, but when the water-guzzling beverage (one almond requires about a gallon of water to grow) got linked to the California drought, the successor to soy milk fell from grace.

Except for soy, no other nondairy milks have caught on domestically. They are too thin, too bitter or contain a long list of artificial thickeners and preservatives: xanthan gum, potassium sorbate, sodium benzoate.

Then came Oatly, the maker of a faux milk made from oats. Oatly is a Swedish company that was founded 25 years ago by a food-science professor named Rickard Oste. He was doing academic research on the prevalence of lactose intolerance and wondered about starting from scratch: finding a source for milk other than cows. In Sweden, oats are a particularly abundant crop, so Oste developed a food-science technology that uses enzymes to liquefy oats into a rich milk in a way that still retained their digestion-boosting fibers. In the same way that cream may be added to milk to give it varying levels of fat, Oatly adds a plant-based canola oil to provide fat content. In Sweden–a dairy-obsessed country–Oatly developed a small but loyal following without much marketing. Then in 2012, Oatly hired a new CEO, Tony Peterson, who gave the company its cheeky but environmentally conscious branding, with packaging that reads, It’s like milk, but made for humans and an Instagram account that hawks T-shirts that say, Post Milk generation. As a result, the product gained popularity in Europe.

Oatly entered the U.S. market last March. Oat milk existed in the U.S. before, but Oatly is unusual for its singular focus on oat milk alone.

The company also took a different route to get its product to market. Instead of reaching out to large supermarkets, Oatly chose coffee shops as its testing ground in the U.S. Mike Messersmith, Oatly’s U.S. general manager, sent out samples of Oatly’s barista edition (the brand’s whole-milk equivalent). “From there it just expanded way faster than we thought,” he says. “The coffee community is so intertwined, and baristas are always sharing tips and tricks.”

James McLaughlin, president and CEO of Intelligentsia Coffee, the first company to sign on with Oatly, said that drinks made with its milk now comprise 13% of all beverages ordered across the shop’s 10 locations–outpacing both almond and soy milk. “It’s the first time my baristas have gotten behind an alternative milk in an intense way,” he says. “We started stocking the liter cartons on our shelves because customers were like, ‘I want to take this home.'”

Caroline Bell, co-owner of Café Grumpy in New York City, says, “We had tried soy, almond, hemp, coconut, and nothing worked with coffee.” With some varieties, you couldn’t taste the coffee; with others, the milk would curdle. The oat fibers plus the added oil in the barista edition of Oatly give the milk a thicker consistency, which produces a stable, undulating foam that will hold for a long time. The milk also contains an acidity regulator called dipotassium phosphate, which ensures that it doesn’t separate when mixed with an acidic drink like coffee. The effect is not exactly as creamy and foamy as whole milk, but it was the best-performing substitute these baristas had encountered.

This time last year, Oatly was stocked in 10 coffee shops in the U.S. Now the product is in more than 1,000 shops. By the end of this quarter, it will be in a couple hundred grocery stores in the Northeast and Mid-Atlantic regions, including Wegmans, Fairway and ShopRite.

According to Innova Market Insights, a food and beverage research firm, alternative milks are projected to be a $16 billion global industry in 2018. Oatly may be the first to find how much oats can sow from bounty. 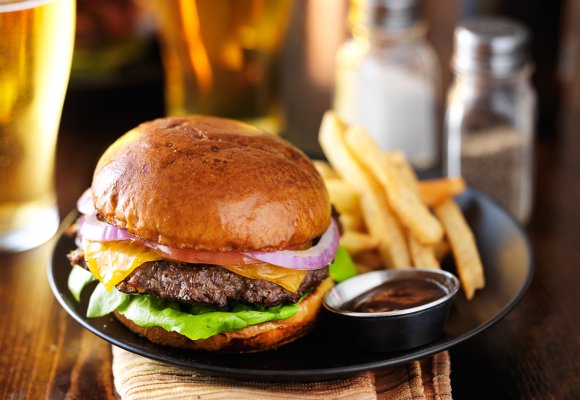 This Restaurant Is Selling a $3,000 Burger With an Engagement Ring in the Bun If That Does It For You
Next Up: Editor's Pick