Stormy Daniels' Lawsuit Against Donald Trump Raises the Question: When Can You Sue the President?

Adult film star Stormy Daniels is suing Donald Trump over a nondisclosure agreement on their alleged affair, adding to a long list of civil cases the president is already facing.

In a civil lawsuit filed recently in Los Angeles County Superior Court, lawyers for Stephanie Clifford (Daniels’ real name) argue that the nondisclosure agreement she signed before the 2016 election is not valid because Trump never signed it.

Trump is also facing a lawsuit from former Apprentice contestant Summer Zervos for defamation, and he’s been sued more than 100 times in federal court, on issues ranging from his actions on immigration to the Constitution’s Emoluments Clause.

In the meantime, special counsel Robert Mueller’s investigation into Russian meddling has already tripped up several of Trump’s associates, leading some to wonder whether he would try to indict the president as well if he had strong evidence of wrongdoing.

All of these cases have raised a straightforward question with complicated legal ramifications: Can you sue the president? Does it matter if it’s state or federal court? And can you indict the president?

Here’s a look at what we know.

Both the Daniels and Zervos suits raise a serious legal question: can someone bring a civil suit against a sitting president in state court? Trump’s lawyers say no. “State court can’t exercise any control over the president under any circumstances,” Trump’s lawyer Marc Kasowitz argued in New York state court in early December. The motion to dismiss Zervos’ case, Kasowitz continued, is about “protecting the ability of the president to do his constitutionally mandated job.”

In court filings, Trump’s team has cited the Supreme Court’s 1982 decision in Nixon v. Fitzgerald, which held that the president has “absolute immunity” from being held liable for damages in civil lawsuits for conduct within the “outer perimeter” of his official presidential duties. “Because of the singular importance of the President’s duties,” the decision reads, “diversion of his energies by concern with private lawsuits would raise unique risks to the effective functioning of government.”

This is a key element of Trump’s lawyers’ argument around the Zervos case for why he can’t be sued in state court. But there are limits to the holding in Nixon v. Fitzgerald: the case only applied to civil suits in federal court, not state court, and only to civil suits related to official actions as president, not personal conduct.

It’s a later Supreme Court case, 1997’s Clinton v. Jones, that introduces private acts to the patchwork of laws on presidents and civil lawsuits. This time, facing a case in which former Arkansas state employee Paula Jones accused President Bill Clinton of sexual harassment, the Supreme Court said the Nixon v. Fitzgerald ruling on immunity from civil damages did not apply to “unofficial conduct” by the president.

“We have never suggested that the President, or any other official, has an immunity that extends beyond the scope of any action taken in an official capacity,” the Court held. “The litigation of questions that relate entirely to the unofficial conduct of the individual who happens to be the President poses no perceptible risk of misallocation of either judicial power or executive power.”

This decision is good for those on the side of Zervos and Daniels, ruling definitively that presidents can be sued while in office for private conduct.

“Clinton v. Jones makes clear that this Defendant is not entitled to qualified immunity — or any other species of official acts [of] immunity — because this case involved unofficial conduct by Defendant before he assumed office,” Zervos’ lawyers said in a court filing earlier this year. “Precisely because Defendant’s underlying tortious behavior has nothing to do with his current duties or office, and because it occurred before he took that office, he does not have immunity from suit.”

But again, there’s a critical unanswered question in the Clinton v. Jones opinion: that case only applies to litigation in federal court, and did not decide the issue of whether a civil suit can be brought against a sitting president in state court.

In fact, the Supreme Court explicitly decided not to decide that question, explaining that state court suits could raise different legal questions than the ones decided in Clinton v. Jones. “Because the Supremacy Clause makes federal law ‘the supreme Law of the Land,’ any direct control by a state court over the President, who has principal responsibility to ensure that those laws are ‘faithfully executed,’ may implicate concerns that are quite different from the interbranch separation of powers questions addressed here,” the majority opinion notes in a footnote.

The power difference between state and federal court arises in part from the Supremacy Clause of the Constitution, which establishes that federal law bars states from interfering in federal functions. There would still be limits, however. In civil suits, “there’s no absolute immunity from being sued in state court for a president,” explains Samuel Issacharoff, constitutional law professor at New York University Law School. He gives the example of if a president and his or her spouse wanted to get a divorce while in office — which would have to be handled in state court.

“Divorce matrimonial matters are not actionable in federal court, and it is inconceivable that we would make [the spouse] wait four or eight years [to get a divorce],” Issacharoff says. “The ordinary conduct of the life of the president as an individual may give rise to legal issues, and we’ve never said that there’s immunity from that.”

And some legal experts think that footnote was merely standard practice by the Supreme Court to limit the scope of its ruling on a constitutional issue, and that there’s no reason to think the Court wouldn’t have decided the case the same way had it been a state court in question.

“There’s nothing in the opinion that would militate heavily against the same type of process in state court,” says George Washington University Law School professor Jonathan Turley. “Indeed, one could argue that the federal system has a greater likelihood to recognize a form of immunity than the state system. Under federalism principles, these are two different systems, and the state system has its own independent authority and right to pursue defendants.”

As it stands now, Trump cannot be held liable for civil damages in conduct related to his presidential powers, but he can be held liable in federal court for civil damages related to his personal conduct before he became president. And if any presidency will lead to a clear decision on whether he can be subject to a civil suit on personal conduct in state court, there’s good reason to think it might be Trump’s.

There’s also a constitutional question about whether a sitting president can be criminally prosecuted, and there isn’t a clear answer. It has never happened before, and no court has definitively ruled on the issue. (The Supreme Court heard arguments about it in 1974 about President Richard Nixon, but never resolved the question.)

The text of the Constitution doesn’t explicitly state whether a president can be prosecuted while in office, so arguments are based on structure and inference. The official view of the executive branch is that it can’t be done. The Office of Legal Counsel wrote in a 2000 memo arguing a president can’t be indicted, “The indictment or criminal prosecution of a sitting President would impermissibly undermine the capacity of the executive branch to perform its constitutionally assigned functions,” though it acknowledged, “neither the text nor the history of the Constitution ultimately provided dispositive guidance in determining whether a president is amenable to indictment or criminal prosecution while in office.”

In Mueller’s position as special counsel, he is bound by Justice Department policies, but it’s an unresolved question how much deference he must give to the Office of Legal Counsel’s previous legal analyses on this issue. Under the interpretation that the president cannot be indicted in office, Trump would have to resign or be impeached first, and then could be criminally charged afterwards.

In that case, if Mueller’s investigation finds what he believes merits an indictment, historically that means he would bring his findings to the House, which would decide if it warrants “high crimes and misdemeanors” to impeach and proceed from there. The basic idea behind this precedent is that if you’re going to undo an election, it should be by a body that is subject to the will of the people. 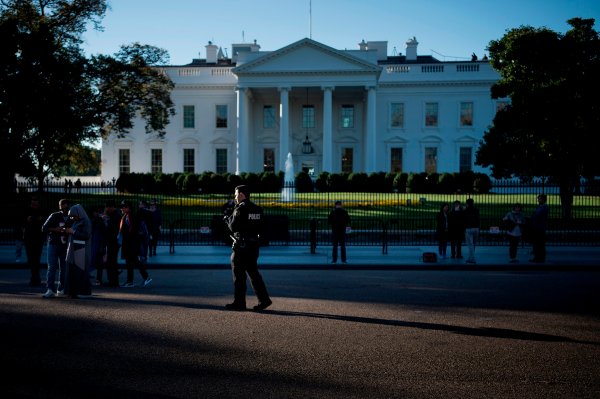 Man Who Shot Himself Near White House Dies
Next Up: Editor's Pick