Inclusivity Reigned at the Oscars. Except When It Didn't

These days, no matter how hard one may try to keep politics out of an evening, they have a way of seeping in.

That’s how it was at the 90th Academy Awards on Sunday night, when The Shape of Water took the Best Picture award at the end of an evening that was studiously not about the issues that have dominated Hollywood over the course of the past few months—except when it was. That film, a love letter to classic cinema’s romances and creature features—that is or is not a statement on divisions in contemporary society, depending on the light through which one sees it—seemed like the perfect winner for a ceremony that felt at odds with itself. After all, at times this year’s Oscars seemed a tribute to an imagined past Oscars of the mind, and then at times they seemed something radical and new.

The fundamentals of the ceremony, despite dashes of energy that felt risky and daring, had changed little even as the industry the ceremony honored had begun to change a lot. Jimmy Kimmel—who’d seemed outmatched last year by an envelope mix-up before the evening’s most anticipated award—had months to prepare for a show in the wake of the culture-shaking Harvey Weinstein revelations. And he seemed to have spent those months brainstorming how not to address anything at all. Kimmel, a talk show host who has been inspiring and catalyzing in the past year while discussing issues personally connected to him, seemed flat and uninspired in his monologue when dealing with topics that demanded laceration. I missed the relentless satiric mind of past Oscar host Chris Rock as Kimmel made a joke about the 2000 film What Women Want, or joked about a “tweetstorm from the President’s toilet.”

Read more: See All the Winners of the 2018 Oscars

His most urgently beat drum was the idea that the deliverer of the shortest Oscar speech would win a Jet-Ski. It wasn’t that the reveal of the Jet-Ski wasn’t cute. It was that this year of all years, Oscar viewers wanted to hear a sharper host’s better jokes—and they wanted to hear what those accepting the prizes had to say. Kimmel was largely absent from the middle portion of the broadcast (he reappeared, weirdly, at the end, to cut short the Best Picture acceptance speech by a Shape of Water producer). His absence may have been a good thing: Kimmel’s mid-awards-show sojourn across the street with a team of celebrities to “interrupt moviegoers” and give them candy was a time-consuming tease-the-normies stunt, much like one he performed last year. It kept him off the premises teasing and provoking “movie fans” while others at the Oscars got to work delighting and stimulating actual movie fans.

Shortly after Kimmel had left the building, a trio of presenters—Ashley Judd, Annabella Sciorra, and Salma Hayek Pinault, all of whom have accused Harvey Weinstein of harassment or assault—took to the stage to introduce a nicely put-together montage about growing inclusiveness in the movie industry. All spoke from the heart; Sciorra, whose promising career was put on indefinite hiatus after her experience with Weinstein, was moved to the point of speaking haltingly to an audience that applauded her knowingly. For viewers at home, a host with moral authority—someone to have done as much to contextualize Judd, Sciorra, and Hayek Pinault—might have been nice. But Sciorra’s evident emotion did the work.

The ceremony was unwilling, and unbending; it balanced the montage about new voices with an odd and apropos-of-nothing one about the history of movies that have paid tribute to the U.S. military, as though inclusion were a specifically liberal charge that needed balancing rather than the norm in the Hollywood of The Shape of Water, Get Out, Lady Bird and Call Me by Your Name. The ceremony’s reshuffling of the deck, in the absence of last year’s best actor, Casey Affleck—who’d have traditionally presented an award to the best actress winner but bowed out so as not to distract from the ceremony due to past sexual assault claims—ended with Jane Fonda and Helen Mirren bestowing an award on best actor Gary Oldman, against whom have been lodged domestic abuse claims. To those who’d suspected Affleck’s absence was ultimately for the good, it was a toxic puzzle that ended back where it started.

Read more: These Are the Records Broken at the 2018 Oscars

Oldman had little to say, but others sure did. James Ivory, the 89-year-old writer of Call Me by Your Name and (somehow, despite his many credits) a first-time winner, delivered a moving tribute to his past collaborators after winning best adapted screenplay. At the other end of the spectrum of experience, relative newcomer Jordan Peele, who won for best original screenplay, noted he’d stopped short many times in the writing of his script, fearful that no one would ever finance it. That someone finally did should have given hope to many watching from home, but that someone as creative as Peele felt so stymied by fear of financing should have been a warning sign to decision-makers inside the Dolby Theatre. Into a staid presentation of two awards, something creeps in, as it did during Sufjan Stevens’s odd, affected and affecting performance of Call Me by Your Name’s nominated song “Mystery of Love” or during a signed acceptance speech for the live-action short winner, about living with deafness. No show needs to address the President, but no show can be apolitical. The Oscars as a ceremony basically tried to be, but its performers, presenters, and winners rejected it, and that’s to their credit.

Oldman’s counterpart, Frances McDormand, did too. At the end of an awards season during which she’d often seemed short on things to say about a movie that was meant to catalyze conversation, she found a voice. After thanking her family, she signaled to the female nominees in the venue to stand up, a signal to the actresses nominated, and the one director nominated, and the one cinematographer nominated, to keep pushing. It was a signal to viewers at home, too. (I suspect, given McDormand’s urging for listeners to sign an “inclusion rider,” that the speech was mainly meant for the room. No matter—it reached even some viewers jaded by McDormand’s omnipresence these past months.)

“I wish I was a woman, I really do,” Kimmel said, taking the stage after McDormand’s speech. The joke was, of course, that he doesn’t. The same women who had to carry the weight of trauma breaking into an inhospitable industry also had to do much of the work of explaining to a curious audience how they felt while Kimmel played patty-cake with civilians across the street, or made a tepid jokes about Trump. But no matter. These Oscars showed, in their quieter moments, how individual people—women, people of color, gay men, allies—could be powerful political agents just by being themselves, explaining their experience, and doing what film is meant to do: Reach out and connect. We’re in a golden age of sorts. Simply to let it wash over us is edification enough. Who needs a monologue? 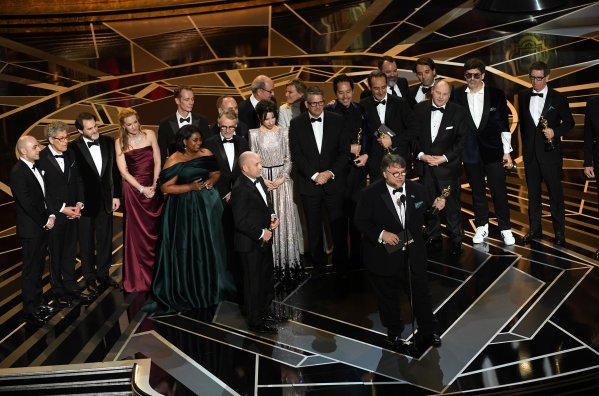 These Are the Records Broken at the 2018 Oscars
Next Up: Editor's Pick