A golden statue of Harvey Weinstein sitting on his infamous casting couch has popped up near the Hollywood Walk of Fame ahead of the 90th Annual Academy Awards.

Located at the intersection of Hollywood Boulevard and La Brea Avenue, the sculpture features the disgraced producer—clothed only in a bathrobe and slippers—reclining on a chaise lounge with an Oscar statuette in hand. The installment, which appeared on Thursday, was created by street artists Plastic Jesus and Joshua “Ginger” Monroe and is intended as a reminder of the film industry’s dark underbelly.

“For many years the exploitation of many hopefuls and established names in the industry was brushed under the carpet with their complaints of harassment and sexual abuse being ignored or worse,” Plastic Jesus told The Hollywood Reporter. “Hopefully, now in the light of recent allegations against many leading figures in Hollywood the industry will clean up its act.”

Ginger—the artist behind the naked Donald Trump statues that made waves in 2016—then explained where the idea of posing Weinstein on the couch came from.

“The whole couch and the entire image it gives off was to me a visual representation of the practices and methods that are used in Hollywood with these big powerful people,” he said. “They have money and power to give jobs and they use that for their own sexual gratification and there’s no better way to visualize this than the way we did with the casting couch.”

Weinstein is facing a number of accusations from various women ranging from sexual assault to rape. He has denied allegations of non-consensual sexual contact. 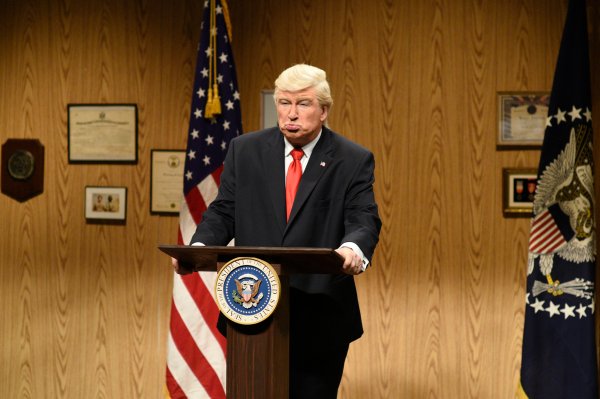 The Internet Is Having a Field Day With Trump's Alec Baldwin Burn
Next Up: Editor's Pick