FORT LAUDERDALE, FL - JULY 14: A Delta airlines plane is seen as it comes in for a landing at the Fort Lauderdale-Hollywood International Airport on July 14, 2016 in Fort Lauderdale, Florida. Delta Air Lines Inc. reported that their second quarter earnings rose a better-than-expected 4.1%, and also announced that they decided to reduce its United States to Britian capacity on its winter schedule because of foreign currency issues and the economic uncertainty from Brexit. (Photo by Joe Raedle/Getty Images)
Joe Raedle—Getty Images
By Aric Jenkins

Delta Air Lines CEO Ed Bastian issued a company-wide memo Friday addressing the recent fallout between the carrier and the National Rifle Association in the wake of the deadly Parkland, Fla. school shooting.

Bastian, who opted to end Delta’s discount program for NRA members as online petitions urged companies to boycott the group, said in the memo sent to employees that Delta was not trying to take sides in the ongoing gun control debate. But Bastian said the Georgia-based company stands by its decision to cut ties with the NRA despite backlash from state lawmakers, who passed legislation in retaliation Thursday to kill tax exemptions on jet fuel Delta uses.

“Our decision was not made for economic gain and our values are not for sale,” Bastian wrote in the memo. “We are in the process of a review to end group discounts for any group of a politically divisive nature.”

He added the company is also actively working to “end group discounts for any group of a politically divisive nature.”

Bastian also dismissed the possibility of Delta relocating its headquarters out of Atlanta — an option offered by governors in multiple states that approve of Delta’s stance, such as Washington and New York.

“None of this changes the fact that our home is Atlanta and we are proud and honored to locate our headquarters here,” Bastian wrote. “And we are supporters of the 2nd Amendment, just as we embrace the entire Constitution of the United States.”

“I have tremendous respect and admiration for [Georgia] Governor Nathan Deal, and thank him for the work he has done on the jet fuel tax exemption,” Bastian added. “He is a great friend to Delta. I know this action by the state legislature troubled him as it does all of us.”

Delta is one of many companies, including Enterprise, First National Bank of Omaha and United Airlines, that decided to stop NRA discount programs following the Feb. 14 shooting at Stoneman Douglas High School, which left 17 dead. FedEx is currently the only major company to still offer perks to NRA members. 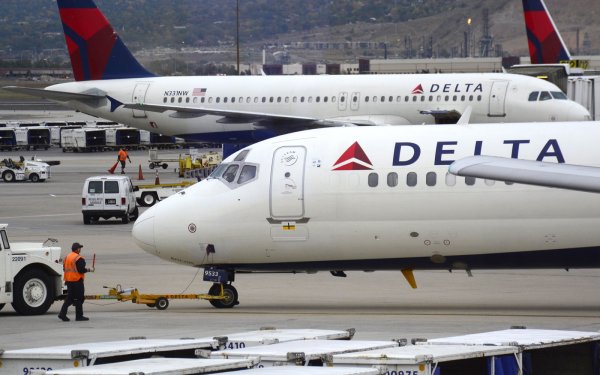 Delta Will Never, Ever Leave Georgia. Here's Why
Next Up: Editor's Pick